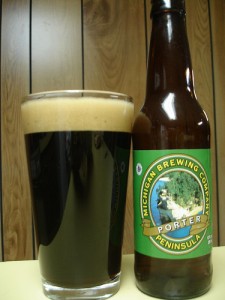 Information: (Site) “The origins of Porter date back to London in the early nineteenth century, when it was popular to mix two or three beers.  Brewers eventually matched this by brewing with high roasted malts, providing a dark, cloudy and hoppy brew.  This beer quickly became the favorite of porters working in London area markets and eventually the beer adopted the name of it’s main consumers. Our blend of black and chocolate malts provides a distinct hint of chocolate which is balanced lightly with Warrior and other hops making this a distinct and palatable porter. We hope you enjoy the tradition.”

I have spoken quite frequently about my love for two things when it comes to beer: 12-packs with a large, differing variety therein, and dark beers. So, nothing pleases me more that when I find, in a box with the label “brewer’s choice” one bottle of a Porter I have yet to taste. Even though it is the only one, I’m just as excited to try a fine, dark beer from a brewery less than seventy miles from my own backyard.

The first thing I notice is that the pour, for a Porter, is not nearly as deeply hued as just about all the others I’ve had. Intriguing, but I’ll save the judgment call for the taste. The scents are nearly identical: oaky, a slight black licorice nose, vanilla, and a dose of malts to balance it out. There is a combined hint of chocolate which seems to be the combined mixture of all the other smells, but either way, it’s a very well-rounded nose.

The first sip is deep, rich, and quite chocolaty and amazingly flavorful. The hops are a little more evident than in many other Porters, and that makes for a nicer more complete amalgam of flavors that hangs around longer than just the sweeter styles. It is quite oaky and peppery, thanks to the hops, but the chocolate malt s do a fine job of balancing that out so neither is more overwhelming than the other. In fact, the more sips I imbibe the more I’m resigned to admit that the whole thing is much akin to a mouthful of bittersweet chocolate, and that is nice, but different. So, no, to answer myself from earlier, the lighter color does nothing to take away from the delicious flavor. This is the kind of beer you want to attempt to match flavors with in the foods you choose, and that’s a bit tough. But, it would really go well with some stronger cheese, a tomato-based application, or even chocolate. A lovely example of the style.

Rating: * * *
Not the greatest Porter in the world, but a nice example of a slightly different style.