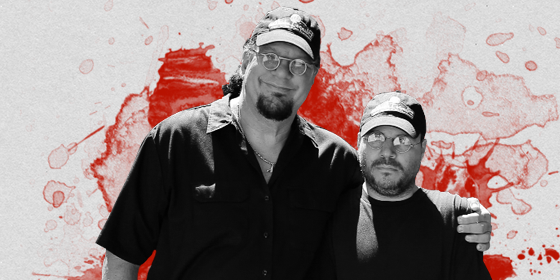 Yeah, it doesn’t have the same ring to it as Penn & Teller, but the team of Penn Jillette and Adam Rifkin promise to make a one-of-a-kind crowdfunded horror experience (at least until it gets ripped off ten thousand times like any successful horror movie.) Although not a frame of footage for the film itself has been shot as of the time of writing, it’s already been a rather odd ride for the writer/star/magician/juggler/giant and the director/writer/shorter guy and their fans. Even most conventional horror filmmakers wouldn’t try to crowdfund with an ad that shows the star being as off-kilter as this:

But they’d also probably not be able to get promotional help from celebrity friends such as Ben Stiller and/or Trey Parker & Matt Stone to help promote their project either. They also probably wouldn’t have their friends ask people not to donate because it’s making the person they’re donating to worse.

The premise for the Director’s Cut is that the audience is watching a conventional crime/horror film called Knock Off. That movie within the movie is about the pursuit of a killer who mimics famous serial killings and somehow brings samples of the DNA from the historical victims to the scenes of his current crimes.

However the creepiness of the premise is overshadowed by the creepiness of the director’s commentary that’s playing as we begin. It’s not a special feature, it’s part of the movie itself. And we find out in due time that the “director” is actually a crazy man named Herbert Blount who poured every last penny he had into helping to crowdfund Knock Off so that he could have access to the set, kidnap the female lead, and make the movie he intends. It turns out that’s the movie we’re watching.

So, it’s a movie where one of the characters comments on the movie we’re watching in a way both meta and in character. This sort of thing is fairly unusual in film but not so much in, say, horror literature. Mark Z. Danielewski’s 2000 book House of Leaves is probably the most famous example. In fact, JJ Abrams recently co-wrote a book called S where much of the story is notes written in the page margins about the main story and was interviewed about it by Neil Gaiman. Oh, speaking of Neil Gaiman, he also did a video promoting the campaign to fund Director’s Cut.

Penn Jillette is doing some rather unusual stuff to “get into character” as Herbert Blount, and there’s a lot of other oddness in the making of the film even at this early stage as well. For example, Jillette actually chipped in tens of thousands of dollars for the project in character as Herbert Blount and wrote a comical and creepy comment about it.

Additionally, among the many contributors to the project were both Glenn Beck and Lawrence O’Donnell. They both gave at the level where they get to appear in the movie as police officers. Unfortunately there probably won’t be room in the film’s running time for it to briefly become an Odd Couple-type buddy cop flick between the most annoying mouthpieces of right-wing and left-wing political talk shows. 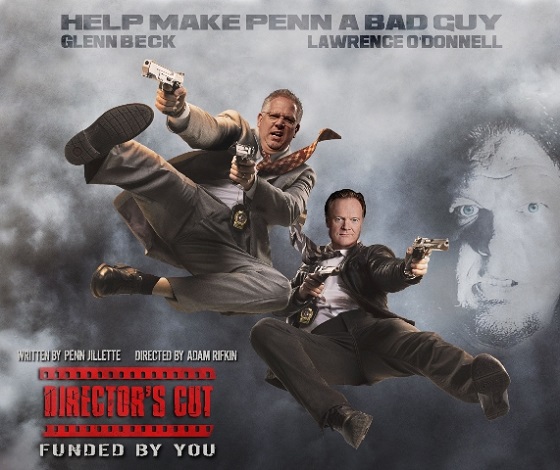 Even stranger was an announcement regarding Penn Jillette’s ponytail. Jillette, apparently fancying that he could sell parts of his body for thousands of dollars like he’s Elvis Presley, offered to sell his pony tail for $25,000 and found a buyer. It was none other than Randy Pitchford, head of Gearbox Software, the guys that developed the hit game Borderlands. Hopefully this means the ponytail will somehow wind up as an Easter egg in Borderlands 3. Whatever happens to it, donations like this allowed the movie’s budget to climb over $160,000 above the already ambitious $999,972 goal. 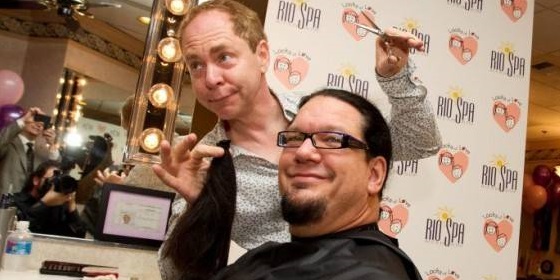 “If you’ve got a few more thousand, I can keep going.”

As to who is going to distribute this movie, I’m going to assume it will be Sony Pictures Classics. They’ve already done distribution for the documentary Tim’s Vermeer, a film Penn & Teller executive produced and which news sources like Hollywood Reporter are reporting is Oscar worthy. Hopefully they’ll be able to help Penn & Rifkin blow the minds of audience members the world over next year. 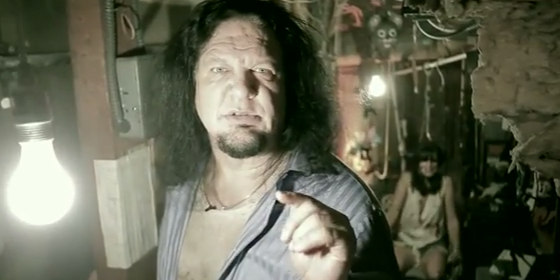