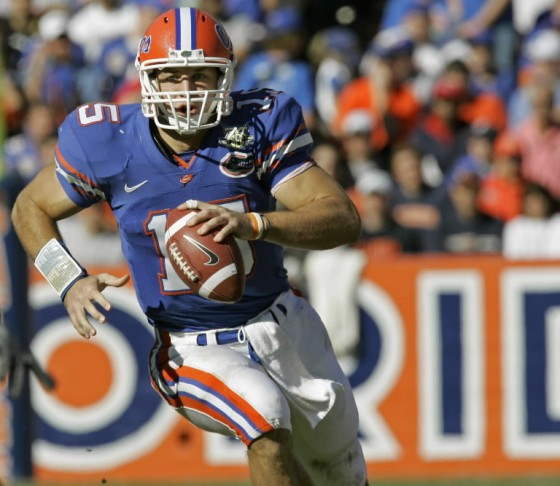 For those living under bridges outside of Denver and thus claiming ignorance of the Great Tebowoski, you aren’t reading this ’cause your broke ass doesn’t own a computer. However, you may have stolen a nice cell phone and if so I would fully encourage you spend your time with like minds, and that would bring you here. If that is the case, and you are dying to know why the entire world, circumcised or not (we’ll explain), is enamored with the 25th pick from this year’s NFL Draft… you’ve come to the right place.

10. You don’t want Tebow to date your sister. You want him to date your mom.
The NFL has been troubled by lackluster character and questionable characters since the dawn of man. It’s a brutal game rarely played by anything but brutal men and the boys-will-be-boys mentality has become especially worrisome over recent seasons. It used to be the league’s star players were treated allowed to enjoy privacy as the bulk of the fodder for tabloids came from other industries (namely entertainment). These days TMZ is running a division specifically focused on the escapades of athletes and the lives of privilege they enjoy away from the field. Major news corporations dedicate portions of their staff and effort to the transgressions and legal woes and speculation of potential legal woes these players endure. Every mistake that used to be tolerated and ignored no longer can be.

Tebow appears to be the antithesis of it all. He’s religious without label as a zealot. He’s righteous without being judgmental. He appears to be free of almost any noteworthy character flaw and all accounts suggest he is as true a man of faith as any passer this side of Kurt Warner. He’s an NFL owner’s wet dream and the value attached to resulting merchandise sales alone makes Tebow the object of affection, whether you are a kid buying  a jersey or the corporate suit selling it.

9. Tebow stays at the Holiday Inn Express.
It’s not the typical discussion you’ll find at Gunaxin… but how many folks do we discuss that can list “mission to perform circumcisions in third-world countries” on their list of accomplishments away from football? He’s essentially a doctor… or at least a nurse practitioner… and his work was done in the name of charity and humanity.

He’s ever PR man’s wet dream as well… and if you ever have a teammate with a nasty foreskin infection, who ya’ gonna call? 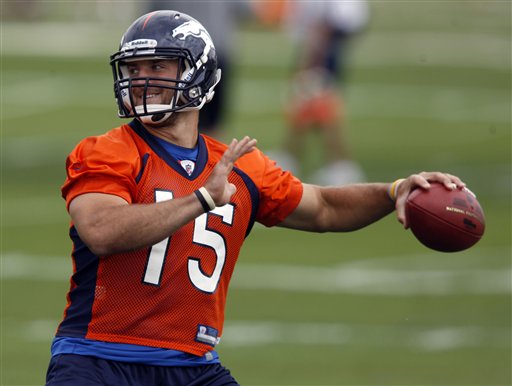 The Broncos Arm of... Today?

The prevailing image of savage rule for the NFL is nothing new and, back in the ’60s and ’70s, Merlin Olsen was the exception to the rule. The man was respected as a gentle giant, as a man of conviction in a world of chaos and violence, and for those that grew up loving the NFL during those days he was to football as Jimmy Hendrix was to metal… he transcended common perception and bias. He was the star of a popular television series advocating family values and, for many, religious beliefs that failed to mirror the social conscience not only of the NFL but of society as a whole. Olsen became the model of a man’s man, not afraid to be different while still working as one of the most feared and respected defensive tackles the game has known.

Many would label Tebow with similar views. He comes from humble beginnings, he lives his life by religious virtue and standard, and he openly advocates and promotes a lifestyle that sits about as far to the right of what our society has come to define as “the norm” as you can find in professional athletics. He openly admits to life of religious conviction and even mocked the press when asked if he was a virgin, shocked by the media’s undeniable silence in response to Tebow’s candor in stating, “Yes, I am,” after he was asked if he was saving himself sexually for marriage.

He offers no apology for promoting his religious beliefs in everything he does, yet (much like Olsen) he never comes off as judgmental or superior. Those that interact with Tebow speak of his ability to engage ANYONE in meaningful conversation, his ease in fitting into any conversation thrown his way, and his ability to present an image of comfort and calm in response to any interaction he faces. And (once again, much like Olsen), you will struggle to find a man that faced Tebow on the field of collegiate battle that won’t sing his praises. He is often described as “relentless,” as having “a killer instinct,” as a player who displays a gift for motivation and passion for the violence of the game all while maintaining a level of reverence you might normally associate with a pastor or man of the cloth.

Tebow has a world of work to do at the NFL level to approach the prolific career Olsen achieved over 14 seasons in the league, but for those with historic context, it is hard to ignore the comparison… and it would be just as hard to deny the game could benefit from such a personality.

7. Mensa sucks.
There are more than a few out there willing to jump on one perceived weakness in the Tebow armor: intelligence. His scores from Wonderlic testing applied during the NFL Scouting Combine were reportedly among the worse in the lot. Scouting reports laud his mental fortitude but they also note undeniable errors showcased on the field of play, and that has been followed by cries of lacking intelligence.

Here’s the good news… it’s football. I don’t want Albert fuckin’ Einstein runnin’ the offense. Smart people don’t play football. Smart people get rich in careers that will allow them to walk after they retire. Smart people understand HGH is a good thing and are allowed to take it without losing paychecks. Smart people run football teams from the front office. 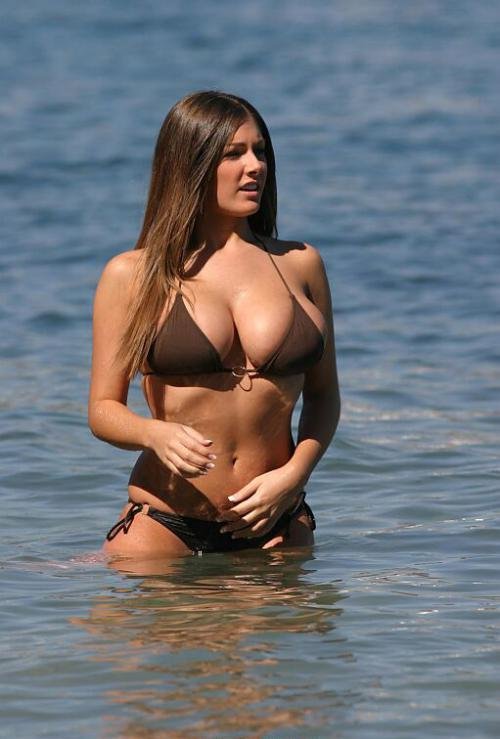 Yeah, we know that isn’t really her. Shut the hell up. He’s smart enough.

6. Chomp on this.
Before you begin to think Tebow is too good and too clean for his or anyone else’s own good… understand he is, at heart, a competitor.

Not only can he walk the walk, but he can talk the talk… when he wants to.

5. Here comes Johnny Appleseed.
We showed you one example of Tebow’s misadventures away from the Christian lifestyle above… rest assured she is not alone. Troll over to Google, type in “Tebow + girlfriend” and enjoy. Trust me… 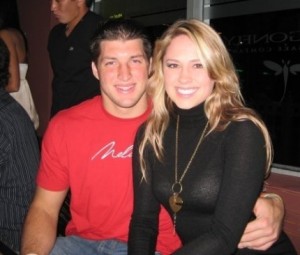 … you’ll understand, even if he’s not really spreading seeds just yet (it’s ok Timmy… Justin Timberlake played that same card, then he did Cry Me a River and cashed in on it in his own way… we understand).

4. Get to work.
On Tebow there is one aspect of his personality that no one debates: his work ethic is unmatched. The following is a list of quotes taken from the Peter King story we linked above, and the running theme shines through.

Tebow treated every pass as if he were in a game. Cadence, snap, drop, step, fastball. After 40 or so throws Harrington held up his right receivers glove to show that it was split across the palm. “Take it easy, man,” he called out kiddingly.

After three quarters of an hour Tebow had thrown about 150 passes. He was spent. The other quarterbacks were long gone, but he had a few miles to go before he slept. “What are you? Tired?” Ben said. “Nosir,” Tebow said, even though he clearly was. Josh laughed about that exchange when it was related to him later. “That little conversation defines the two of them,” he said. “Ben’s not a b.s.’er. Part of his job is to challenge Tim because Tim’s going to have it tough. And Tim plays a little better when he’s pissed off.”

For 53 minutes Tebow threw. About 175 passes—after a regular OTA practice. With all the work he has been doing since the end of his college season, it’s a wonder Tebow’s left arm is still attached to his shoulder, let alone has the zip it does. But he’s in a race to remake his delivery and to master an offense, and he’s not going to work bankers’ hours. “I like when they push me,” he said. “When they stop coaching me, that’s when I’ll be worried.”

Here’s one more factoid from Dan Shanoff (he’s linked multiple times in this piece and I’ll give you his info below… trust me, if you are following Tebow, you’ll want to follow Shanoff) via his own review of the King story:

As reports from Broncos practice today filter out — mostly through the intrepid tweeting of the Palm Beach Post’s Ben Volin, out in Denver on assignment, before he leaves the Gator beat full-time for the Dolphins beat — Tebow is leading the team in practice-ending suicide sprints and taking post-practice snaps with coaches and receivers.

3. Hindsight and Tebow are both 20/20.
Like it or not the NFL is changing. More to the point, it is evolving. The bulk of the quarterbacks making noise and working in positive fashion in today’s NFL are not just passers. They are athletes, capable of doing damage with their feet as well as their arms. Not only is Tebow built from that same mold… he may be the best at it yet.

In his Heisman-winning sophomore campaign at Florida, Tebow become the first player in the history of college football to record both 20 touchdowns both via the pass and the run. In fact…

… he scored 29 total passing touchdowns with 22 gained on the ground during the regular season. Once the SEC playoffs and the following bowl season concluded, he was at 32 passing touchdowns spiced by 23 rushing. He was the ultimate offensive weapon and those are skills that translate well to the progressive nature of today’s professional game.

2. Back It Up
There is nothing more fabled in sports than the promise fulfilled. The demise of the downtrodden, staring dead in the face of adversity, making the promise that nothing will stand in the way of a righteous cause for justice and victory.

Calling your shot and hitting it is the foundation of legend.

Tebow has been there, done that. Following a traumatic loss to Ole Miss, Tebow took the podium and made the promise. Then he and his Florida Gators made good on it, winning the 2008 SEC Championship against Alabama (then ranked #1)  and then the 2009 BCS National Championship against the Oklahoma Sooners, 24-14.

Calling your shot and hitting it is the foundation of legend.

1. Tebow is the Supreme NFL Venture.

In the age of Tiki Barber, Tiger Woods, and Ben Roethlisberger… in the town of Cutler and Elway… the pressures couldn’t be more immense and there is no place to hide.

Tebow, by all signs and suggestions, is up the challenge of it all… and if not, it should be awfully fun to watch.

(BTW, as promised… if you want to follow Tebow and all he is doing in Denver and beyond, make sure you bookmark TimTeblog.com, created and managed by the great Dan Shanoff of Sporting News fame. Outstanding stuff whether you love Tebow or hate him.)