Pet Books : So Wrong, So Funny

So I was quite literally perusing the net for no good reason (an act I’m frequently involved in when the planets align and my kids are asleep and nothing’s on TV) and I stumbled across a message board for some bizarre movies. One of the folks therein chatting about something or other had an icon of a book cover that immediately piqued my interest: a nun about to get, um, ‘messed up intimately’ by a big dog. Look, I have a bizarre sense of humor, okay? So I typed in the name and, not surprisingly, I found a web site HERE completely dedicated to the finding and, subsequent selling, of these books! Oh, I have seen pulpy, sleazy book covers before featuring hunky dudes in a passionate embrace with orgiastic women who are barely concealing their shame, but, until now, I have never seen ‘Pet Books’ (as they’re humorously called) before. These 10 covers are almost too ridiculous to be true, but I assure you, every one is from a real book with, presumably, a real story inside involving characters doing excessively wrong things with their pets. And no, I have read exactly zero of these and yes, it’ll stay that way, thank you. Enjoy! Oh, and mild NSFW’ish. Funny, though.

Peeping On Mom And Her Dog

I just love how the title implies that the other woman in this picture, presumably the daughter, is spying on her canine-obsessed mother. And, above and beyond all that, it also appears that dear daughter is also without clothes. Maybe they can share. 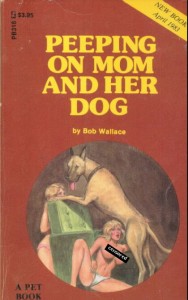 I love the little play on the George Orwell classic. However, I do question if the plot is less about Dystopian government anarchy among actual farm animals and more about having sex with goats. It’s probably just as good a read though. 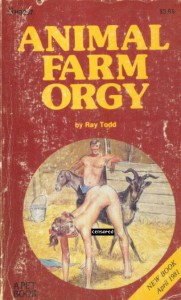 If ever there was a sleazy book title that precisely emulates 80’s slasher films, this would have to be it. I can just see the movie now: The ‘all-boys’ camp is called ‘The Dogs’ and, well, it just gets weird from there. What’s going on in this book? I’d suspect something vaguely similar. 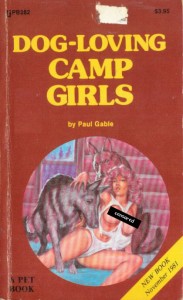 Remember Reading Rainbow? “Does your mother have a dog urge? Is your mom sneaking around with the family pet? Well, if so, then you’ll love the story of little Jimmy’s mom and her secret desire to ‘give the dog a bone’. I loved this book and you will, too!” Butterfly in the sky… 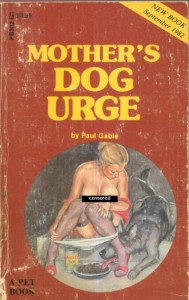 Oh so that’s how she does it. Informative, no?

Things this book title doesn’t have: subtlety. It isn’t tough to guess what Carla’s ‘To-Do’ list looks like in the morning: “1) Go to market. 2)Pick up Tom’s dry-cleaning. 3)Get raped by horse. 4)Linda’s for dinner.” I’m not hanging out with Carla. I don’t even like Linda. 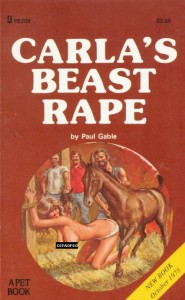 Shouldn’t they be rescuing that poor girl? Oh, wait… 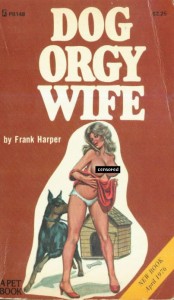 “Woops! It appears all of my clothes fell off! Now what?” 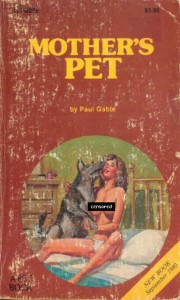 “Hurry, your owner will be home any second!”

It’s a wonder why there aren’t more books permeating the New York Times best seller list that feature the word ‘Rape’ in them? I’d bet they’d sell millions… especially if you include the word ‘Dog’ in there somewhere, too. It could just be a huge ‘RAPE’ in the upper center then, lower right, pretty small type, ‘Dog’. BAM! Millions out the door. Or, maybe it’s a colossally repulsive turn off. I’m not too smart about these things. 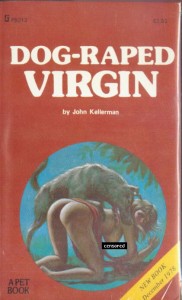 Tonight, on a very special Little House on the Prairie, Laura gets a new pet, much to Pa’s behest. 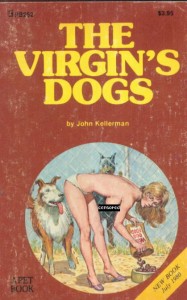 If you’re gonna feed your dogs in just shoes and panties, well…

The Nun, The Dog And The Pleasure

And here, folks, is the book cover I saw that really turned me on (so to speak) to these sleazy pulp gems. The cover itself almost looks too cartoony to be true (like somehow the others are less so)! Just that image of the Nun caught in the act while pledging her ultimate devotion to the Lord is priceless. She’s obviously in serious prayer, here, and that damn dog just can’t seem to figure out how to get the rest of her clothes off what with his lack of thumbs. And how many Nuns do you know that go commando under their robes? Well, I don’t know any Nun’s but I’d still guess very few. Love this cover. 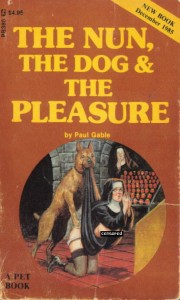 Looks Like Sister Mathilda behind the candles is missing out.