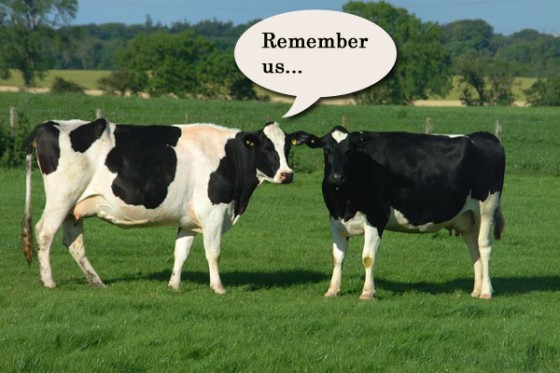 I have to believe deep down PETA means well. I mean, there is plenty of horrifying animal abuse being perpetrated throughout the world that should be exposed and condemned. On this point, I’m sure we can all agree. Unfortunately, their not-stop finger wagging and hand-wringing over every crushed ant and roasted pig has earned them a reputation for being a bunch of meddling dickheads. And heeeeere’s why:

People for the Ethical Treatment of Animals has asked for permission to buy the markers, one in suburban Chicago and one northwest of Peoria. The group says the signs would pay tribute to the more than 20 cattle killed as a result of negligent driving this year.

What’s next, headstones for bugs that splatter on windshields? How about flower wreaths for birds that fly beak first into glass? Listen, I feel sorry for Bessie, really. But I’ve witnessed much worse abuse of cattle and it wasn’t a result of negligent driving. It was fuc*ing martians!!

Where was PETA when this atrocity occurred? Anyone?