Peyton Manning’s Best Off the Field Moments as a Colt 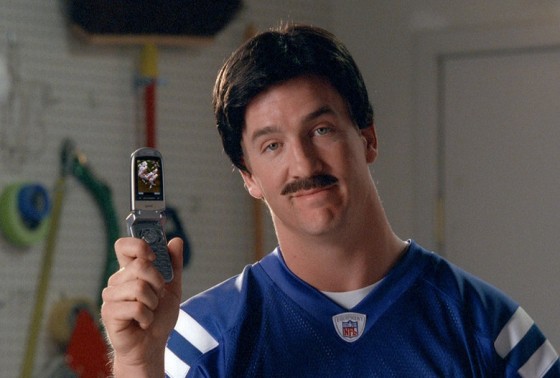 The end of an era. Peyton Manning’s career with the Indianapolis Colts is over. After 14 seasons of smashing records and striking fear into opposing defenses, Indy’s front office chose to pocket the $28 million it would’ve cost to keep Manning and his fused neck on the roster. A harsh move for sure, but the correct one. With Andrew Luck jerseys already being sewn by Chinese child labor earning pennies a day, it’s time to look toward the future.

But before closing the door on Peyton’s days in Indy, and discuss where he might end up, lets look back at some of his most memorable moments. Not on the field though, because we don’t really care about his 49 touchdown passes in 2004 or his seven game-winning drives in 2009. No, we care about the things he did on the sidelines, during interviews and on television. Here are some of his best off the field moments as a Colt.

Manning donned an awful wig and an even worse mustache for this Sprint commercial, proving he had zero problem poking fun at himself. Love him or hate him, you gotta respect the man's sense of humor.

Ever the prankster, Peyton participated in some water bottle hijinks at the 2011 Pro Bowl with an unsuspecting Wes Welker as his victim.

Going Off on Jeff Saturday

Peyton is famous for his competitive spirit and desire to win at all costs. Even if that means getting into a verbal sparring match with his offensive line, most notably center Jeff Saturday. Manning not calling enough running plays? Nah..

Okay, so Manning technically isn't a part of this, but his pre-snap antics have become legendary. So much so that comedian Ben Stiller agreed to mimic the sideshow for a Monday Night Football intro in 2008. Skinny pony? Fried chicken? Yeah, that sounds about right.

Ohhh look, baby Marshall (who shares papa's hairline) is trying to eat a reporter's microphone while daddy is pretending to give a turd about Marvin Harrison's career. It's so adorable, we had to include it. Plus, when Marshall is leading Tennessee to a BCS title in 18 years, this will be on a continuous loop at ESPN.

Any time Peyton and Eli make fun of older brother Cooper, it's awesome. And this cameo from a 2009 episode of The Simpsons does an excellent job of trashing Cooper's pathetic athletic prowess.

This hilarious Saturday Night Live parody of the United Way commercials is brilliant and still makes us laugh years later. Peyton drilling kids in the head with a football, telling them to fu*k off and suggesting he may have killed a snitch at one time in his life never gets old.

Bashing kickers, or footies as they're known around these parts, is a birthright for all legitimate professional football players. Which is why when Peyton referred to ex-Colts footie Mike Vanderjagt as an idiot who got "liquored up," we squealed with delight.

Have you entered our $150 Fantasy NBA Freeroll with DraftStreet.com yet?