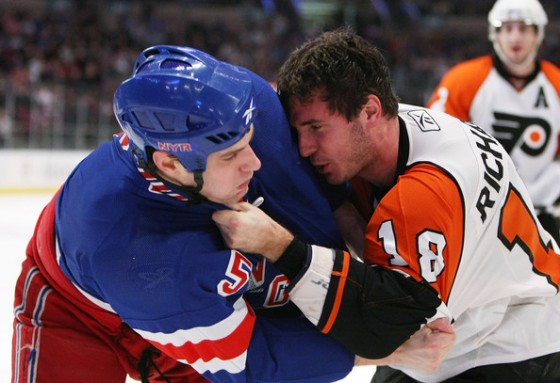 Players throwing punches is nothing new in hockey. But when those punches originate from players on the bench, then we have a talking point.

The Philadelphia Flyers and New York Rangers are two teams that carry plenty of baggage with them. Neither side is a stranger to being at the heart of a conversation about dirty hits, but this one breaks the boundaries of the often discussed hits to the head and boarding calls on the ice. As a matter a fact, this one doesn’t even take place on the ice.

New York’s Brandon Prust delivers a crushing blow to Philadelphia’s Kimmo Timonen, sending the defenseman sprawling into the boards. Timonen searched for a call and while Prust skated off, the Philadelphia bench attempted to send a message.

Granted, it isn’t as if players hopped off the bench to mug Prust, but what we have here is a small slice of what is a troubling development in hockey.

Regardless of which teams are involved, if one player delivers a huge legal hit, the other team immediately responds by trying to drop the gloves. Why?

Don’t they understand that reacting in this manner will only cut big hits out of the game?

Now, if the hit was clearly illegal, then I would understand the reaction of trying to drop the mitts and settle the score. But legal hits, similar to the one delivered by Prust should not result in a stoppage or a mauling or whatever you want to call it.

Clean, legal hits are apart of the game and players need to accept it and realize their reaction may make these types of entertaining blows outlawed.