Picture Proof Cutler is a Quitter 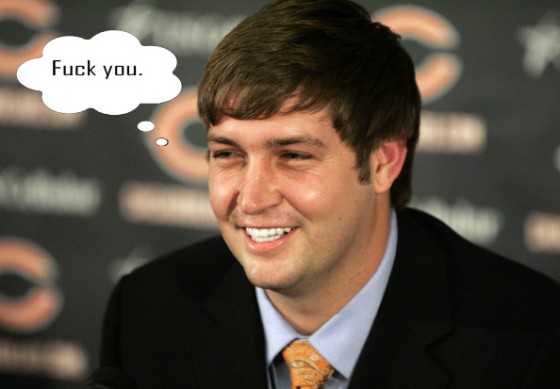 So… with the NFL pushing the Pro Bowl on us during this so-called bye week of the Super Bowl, the media has had plenty of time to pick at the carcass otherwise known as Jay Cutler.

Cliff Notes for the football ignorant: the Chicago Bears shock the world, get to the NFC Conference Championship against historic rival Green Bay, Cutler suddenly leaves the game never to return. He reported suffers a knee injury of unknown severity, he paces the sideline with a headset, the locals and the blogosphere go absolutely ape shit accusing Cutler of quitting on the team and not pushing himself in the most important spot of his professional career to date, and the last week has been spent wading through the controversy that follows.

How bad was Jay Cutler’s injury?

Why is Jay Cutler such an asshole?

Is Jay Cutler really an asshole?

Is it fair to call Jay Cutler an asshole?

Has Jay Cutler ever thrown a pillow case full of puppies into Lake Michigan?

Whatever… the guy tore his MCL. He wasn’t able to return, and those that care about football in Chicago haven’t been able to return either… to mental stability. They hit the parking lot after the game to burn his jersey, they hit the sports radio waves to proclaim him as the town’s worst enemy, and they’ve hit the internet to debate and argue over the morality of the accusation and truth versus perception.

Worst of all, they badgered the guy when he showed up with celeb girlfriend Kristin Cavallari… 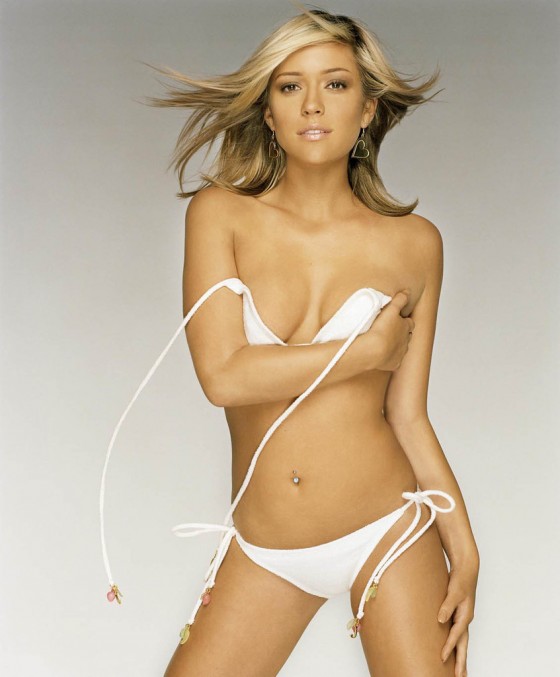 Mrs. Cutler... at least for the moment.

… (an excuse to show her off again, and we’ll take it) shopping on Michigan Avenue, partying downtown, and apparently using his knee as if there were no problems or pain at all.

He even climbed some stairs. Holy shit.

Just type “Jay Cutler football” into Google – you need to add “football” or you’ll be inundated with a massive collection of some grotesque body-building freak – and enjoy. The internet has been flooded by the topic as the allure of Jay Cutler bashing grows. It started in Denver and now it’s alive and well in the City with Big Shoulder, and the rest of the world wants in on the action.

And I have a gift for you all.

A new source has come to me with pictures certifying, beyond any reasonable doubt, your accusations are TRUE… documented, undeniable proof that Jay Cutler is the world’s biggest asshole and that all of your insults, doubts, abuse, defamations, and attacks are 100% justified.

He quit in the Chicago Bears and these pictures, taken just hours after the NFC Conference Championship loss, prove it.

My source prefers to remain anonymous and wouldn’t reveal how this images were obtained, but I’ve got ’em… and Chicago, I’m here to share with you! 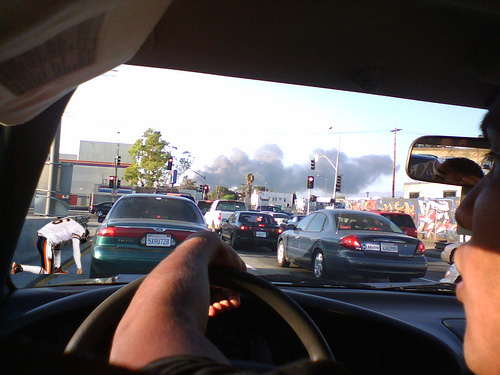 Look... that son of a bitch is lounging around!

As you can see there is clearly a fire burning up ahead… traffic is all fucked up and folks are stressing the situation. People are probably dying in that blaze, fire fighters are working their ass off to get it under control, and the smell of the burn has everone on edge.

AND THERE’S JAY CUTLER, LOUNGING AROUND ON THE SIDE OF THE FUCKING ROAD.

Look at him… like he dropped his roach in the gutter and can’t find the damn thing. That pothead son of a bitch.

WHY AREN’T YOU RUNNING TO THE FIRE, JAY? IF YOU CAN BEND OVER AND KNEEL ON THE GOD DAMNED CONCRETE, YOUR KNEE IS FINE. GET YOUR FUCKING ASS UP THERE AND HELP! 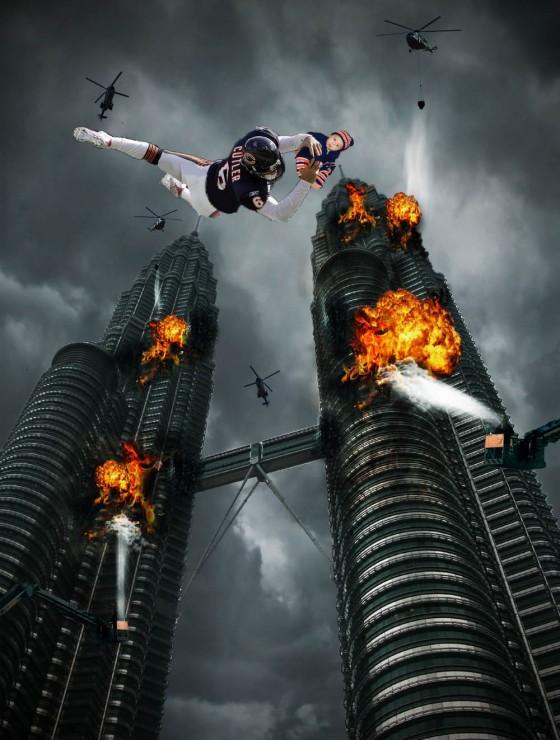 Is that John McClane? NO! IT'S JAY CUTLER! GOD DAMN IT!

Well, it looks like Jay made it to the fire after all… BUT LOOK! HE’S JUMPED OUT OF THE BUILDING WITH THAT BABY, AND THAT BABY IS OBVIOUSLY A BEARS FAN! HE’S DECKED FROM HEAD TO TOE IN ORANGE AND BLUE!

CAN YOU BELIEVE THE NERVE OF THIS MOTHER FUCKER?!?! HE’S SAVING THAT BABY FROM THE BURNING BUILDINGS!!!

IF YOU CAN JUMP FROM THAT BUILDING THEN YOUR ASS COULD HAVE BEEN BEHIND CENTER WORKING AGAINST THE PACKERS!!!

WHAT THE FUCK, JAY?!?!?! IS THAT BABY MORE IMPORTANT THAN YOUR JOB?!?! THAN THE PRIDE OF THE SECOND CITY?!?! THAN THE HISTORY OF THE BELOVED CHICAGO BEARS?!?! 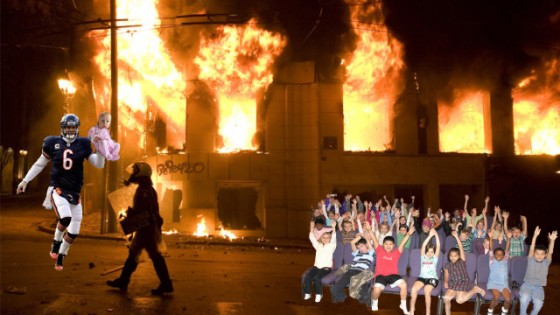 And look at this… Jay goes BACK into the building to save the entire 4th-grade class from the local elementary school, and he’s got yet ANOTHER baby in tow.

LOOK AT HIM RUNNING!!! HE’S FUCKING RUNNING WITH THAT BABY!!! IN UNIFORM!!!

JAY CUTLER CAN RUN INTO A BURNING BUILDING, HE CAN SAVE THE LIVES OF AT LEAST 30 KIDS OR SO, INCLUDING A COUPLE OF BABIES (one who could only be saved by a Bruce Willis-worthy rescue from the Nakatomi Plaza)… BUT HE CAN’T GET HIS ASS BEHIND CENTER AND PLAY IN THE NFC CONFERENCE CHAMPIONSHIP.

So there you have it… CLEARLY this guy is a Grade-A asshole. Let the bashing proceed.