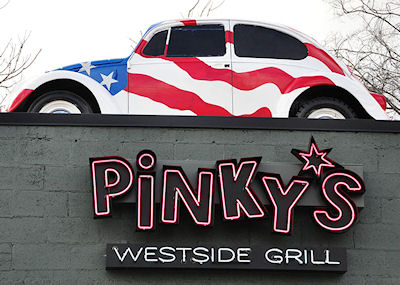 One of my closest friends wanted to have lunch with me and the kids last week, and we chose to meet up at Pinky’s Westside Grill.

(Editor’s Note: Some of the childish embellishments were from the editor. In fact, all of them were… Giggity)

The location of the recently-opened Pinky’s, what was once Triple G Automotive, has been a Charlotte landmark of sorts, sporting a 1966 Volkswagen Beetle on it’s roof. The place only seats 68, but service is such that you can get in and out (that’s what she said) fairly quickly, even with only an hour for lunch.

Though the chef at Pinky’s has a couple of semi-health-conscious items on the menu (such as the “Kinda Fried Turkey Salad and/or sandwich, The Jive Turkey burger, and the Nature Boy — a pinto/chickpea based patty), they are known mostly for their drippingly (also I’m making up words)  juicy 5 oz beef burgers.

Once friend and I got ourselves seated (we gave up trying to wrangle my 4-year-old son) and my 5-month-old daughter was nestled safely on my bench in her travel seat, we ordered our drinks and appetizer — Greg’s Pickles (Giggity)… oh-so-awesome deep fried pickle slices. With a side of ranch dressing, of course.

I took a minute to peruse the menu. Most items have quirky names to match the atmosphere of both the location and the staff. Westside Randy. Tony Baloney (Giggity Giggity). Oh, and the hot dog section? Weiner Wonderland (Giggity Gigity Gig-a-dee). 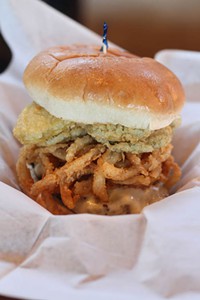 My buddy placed her order and I decided to have the same: The White Trash Burger. This is a juicy five-ounce hand-pressed patty with provolone, Greg’s fried pickles, onion rings and spicy ranch sauce. We both decided against the ranch, however, and chose mayo, instead. I added a little bit of ketchup to mine, ‘cuz that’s how I roll.

I was able to enjoy this delectable creation only with the aid of my dinner company. It is definitely a two-hand burger. Although, if I were to make one myself, I’d add more cheese. But that’s just me.

We played “pass-the-baby” once the youngest grew tired of being in her seat, so that we could both have dual-hand time with our meals. Between juggling the tiny one and keeping The Beast (4-yr-old) occupied and out of the squeeze bottles, this sammich was a bit of a challenge to eat. Normally, I’ll balance the infant on my lap and eat with one hand, but this was a dish I wanted to enjoy completely.

Speaking of the squeeze bottles — they also have their Texas Pete in such a container, which drew my son’s attention. He wouldn’t rest until he tried a drop. After a half hour of “No, honey, it will burn your mouth!”, 4 waitresses lined up at the register to watch me give my son a taste from the tip of my finger. As soon as it touched his tongue, he said “YUM!” Then, the face soured. an aggravated “Augh!” and he went for his drink. The waitresses barely believed I did it. Some kids have to learn the hard way. My son is one of them.

With the first bite, all I noticed was the awesomeness that is a Penguin burg… *ahem*… I mean, a Pinky’s burger. So moist, tender, juicy. All the things a good burger should be. Next bite was full of those yummy fried pickles. Then I tasted a little bit of onion ring. Each bite held a new combo of deliciousness.

Never-ending soda, a great burger, side of pickles, fries for the boy. This was a wonderful lunch with a friend. Although next time, I’ll try for a Mama’s-Day-Out, sans babies. I love ’em, but it’s really difficult to enjoy your meal when you’re constantly having to pull our son off of the floor when he’s growling at other customers because he really wants to pretend to be the guard dog.

* NOTE: Pinky’s Westside Grill is owned by Greg Auten, who was previously a chef and co-owner at the famed Penguin Diner. You know, the one featured in 2009 on that Diners, Drive-Ins, and Dives show on Food Network with the burly, spiky-haired Guy. In September 2010, “Penguingate” broke with the announcement that the historic restaurant would be taken over by a franchiser, there was talk of Auten returning, but instead, he stayed with his months-earlier decision to open Pinky’s. West Charlotte is grateful for your decision, Greg!*