For our automotive audio upgrade project, we turned to Pioneer Electronics and said, “What’s the best $1,000 one could spend on car technology this Christmas?”

Their answer was to send us a new digital media receiver, four new door speakers, a compact pre-loaded subwoofer enclosure, and a five-channel amplifier for review. Total retail cost of the parts, according to Pioneer: $840.

Improvement in sound quality and features over a late-model OEM audio setup: stunning. 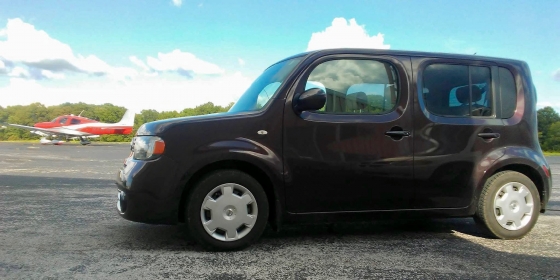 We started with a humble 2010 Nissan cube — the author’s daily driver. Equipped with a mid-level factory stereo, the cube had an iPod interface that was outdated almost from the day the car was new — it had the old 30-pin plug. There also was an auxiliary line-in, AM/FM tuner, and a CD player. The head unit powered six speakers: four 6.5-inch round cones in the doors, and two tiny tweeters in the A-pillars. 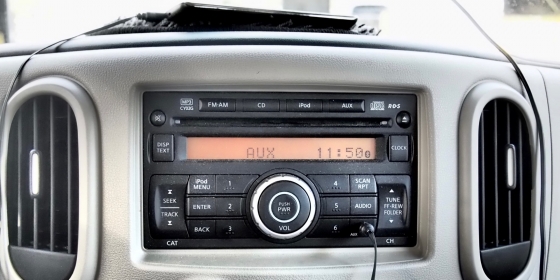 As economy Nissan sound systems go, the cube’s setup was decent. With a head unit and speakers rumored to have been built under contract by Clarion, its ability to play cleanly at high volume was OK.

Where it suffered was at low volume. The paper cones just didn’t provide the clarity needed to get over the considerable road and wind noise in the cabin of the decidedly non-aerodynamic cube at-speed. Also, the head unit’s outdated connectivity options were frustrating in an era where most cars now support things like app integration and cordless Bluetooth music streaming. 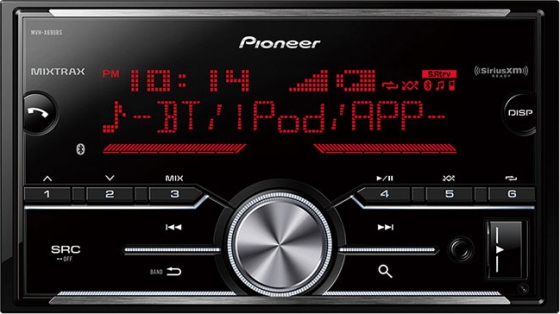 Pioneer first sent us the MVH-X690BS digital media receiver. It’s not a touchscreen, but that’s actually desirable in this car. Its design resembles the cube’s original head unit closely enough at a glance, with its big, central volume knob. Would-be thieves are less likely to target it. Importantly, it also gave us a long list of features. Music connectivity could be made through Pioneer’s ARC app, AUX port, USB stick, or Bluetooth. There is no CD player, because who wants to carry CDs around in the digital music era? It rang in at a reasonable $120 MSRP, according to Pioneer. 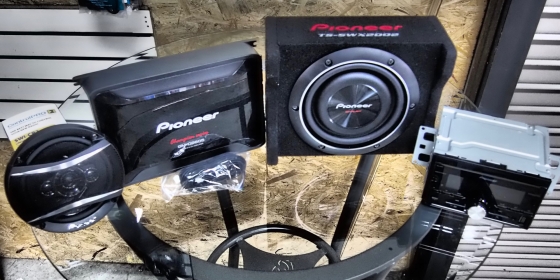 Next, Pioneer sent the mother load of speakers and power: 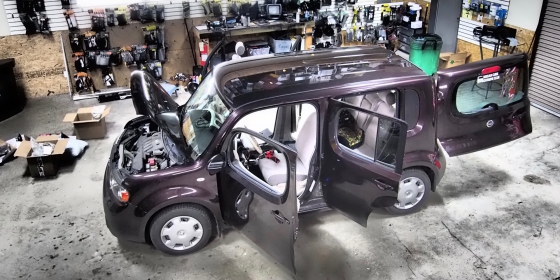 If we had one piece of advice to those considering this kind of intensive car audio improvement, it would be this: Hire a pro. Most of us don’t do car audio installs every day, and it can become overwhelming. Even if you get everything wired and it seems to work, chances are you bungled something.

We turned to Pioneer installer Mike “The Postman” Garcia at Electronic Express in Cookeville, TN. A veteran of more than 30 years in the car audio industry, Garcia established his reputation for a couple of decades in Miami before moving north and serving up awesome car audio installations to wake up sleepy little Cookeville. Over shots of Cafe Bustelo — a sign in his garage says “Mike’s Cuban Coffee Shop,” and we can tell you he makes a mean brew — he expertly did things in five minutes that we couldn’t do in five hours. 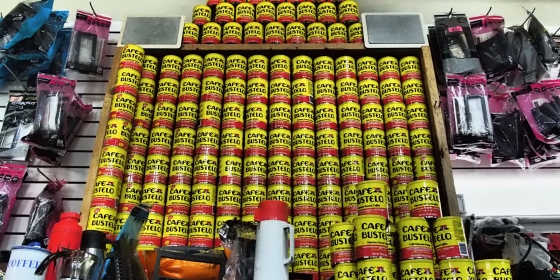 The MVH-X690BS installation went smoothly except for a stupid Nissan quirk: The cube’s Bluetooth receiver is separate from the factory head unit. This resulted in our inability to get the factory steering wheel controls to answer and end phone calls. Pioneer is not to blame. The (non-Pioneer) steering wheel control adapter just couldn’t bridge the gap and send the signal from those steering wheel buttons past the factory Bluetooth receiver to the Pioneer MVH-X690BS. Not to worry, there’s a handy phone button on the driver side of the Pioneer’s faceplate — easily within reach anytime someone calls. 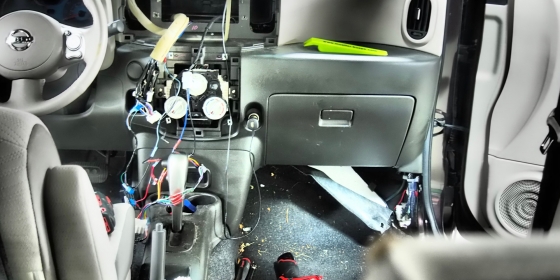 The speakers went in without a hitch, including the subwoofer under the driver’s seat. On a tip from Garcia, we tore the filling out of a cheap polyester-fill pillow and lined the inside perimeter of the enclosure. “It fools the sub into thinking its enclosure is bigger than it is,” he said. See? It’s good to work with people who know their stuff. 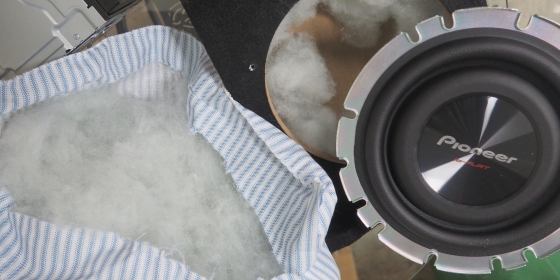 Garcia noticed a large foam block under the driver’s seat, mostly there to create a level floor surface between the seat rails. Removing the block did no harm, so he chucked it. This gave the Pioneer TS-SWX2002 subwoofer enclosure some extra room. Had we needed to, the enclosure could have been mounted without removing the block, but it would have been a much tighter fit. The amplifier installed exactly the same way as the sub, only under the front passenger seat. 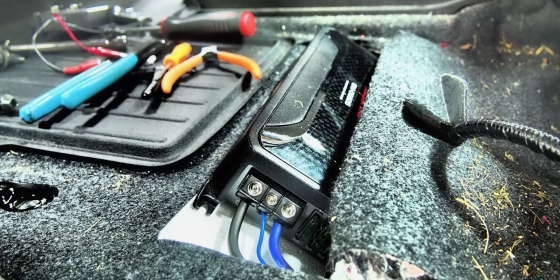 In the finishing phase, Garcia neatly tucked away all the wiring to make the install as clean as any top-shelf OEM sound system. Power cables for the amplifier ran under the carpet and through the firewall to the cube’s battery. RCA and speaker cables were similarly hidden. To look at the cube, even closely, nobody would be any wiser that a much-improved sound system lurks within. 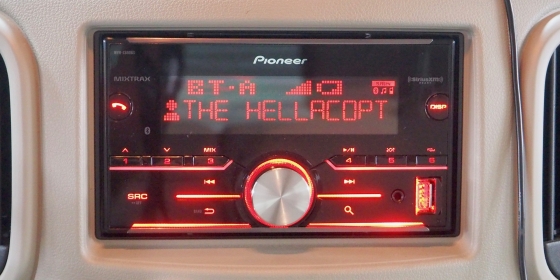 Here is where we make two admissions:

First, when the cost of installation is considered, we likely exceeded our $1,000 target by a few hundred bucks. There was labor, of course. Also, there was the cost of the steering wheel control adapter, wire harness adapter, several feet of wire, and a faceplate surround to make the Pioneer MVH-X690BS look nice and clean in the dashboard.

Second, Pioneer’s manufacturer suggested retail price (MSRP) is not the actual sale price at some retailers. Consider that at the time of this writing, the Pioneer TS-A1686R door speakers were listed at $79.95 per pair at Electronic Express — about 20% less than MSRP.

We feel good in saying you can probably get this setup into your own daily driver for around $1,000 — or maybe just a little more than that, if you hire a good installer like Garcia — by buying the parts from good retailers who aren’t afraid of discounts.

But how does it sound? In the case of our Nissan cube test vehicle, the difference was stark. 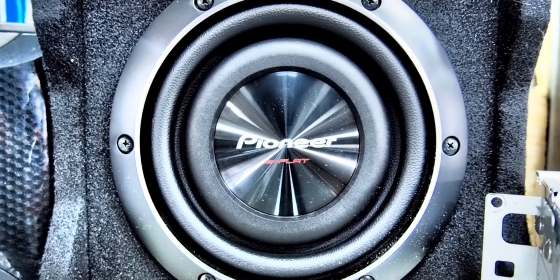 High-volume performance certainly improved a lot, with the subwoofer under the driver’s seat providing a much fuller sound with better kick-drum thump than most top-level factory audio systems we’ve experienced. But  low-volume clarity is where one can tell how good a car audio system really is. The Pioneer TS-A1686R four-way door speakers were a huge improvement, producing definitively clearer music at low, conversation-friendly volume. 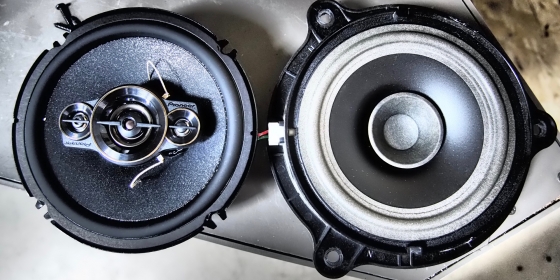 One thing that helped the setup achieve this clarity was the way Pioneer thoughtfully included a digital high-pass filter in the settings of the MVH-X690BS. This allowed us to “scoop” the bass frequencies out of those door speakers and send them through the TS-SWX2002 subwoofer instead. When you stop trying to make your door speakers do things they weren’t designed to do, they shine. 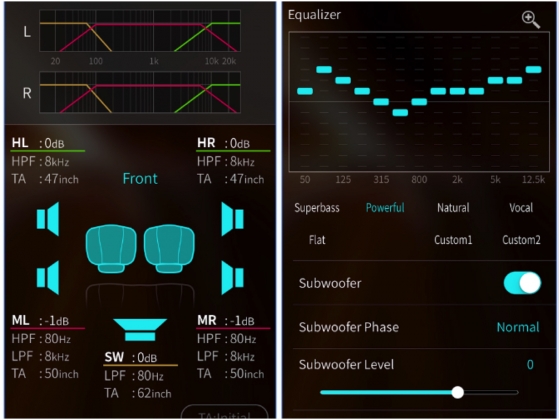 A thumbs-up here to the Pioneer ARC App: Used with an LG K8 Android 6.0 smartphone in our testing, the app didn’t integrate perfectly. It eliminated track forward/back functionality on the head unit and steering wheel, which was something we could use when streaming music over Bluetooth. But the app is supremely useful in tweaking setup parameters, giving us a better visualization of EQ settings and presets than the LED-backlit display of the MVH-X690BS can provide.

It’s also worth noting the app stopped a problem of skipping that sometimes plagues Bluetooth music streaming on this low-rent smartphone. The phone’s pitiful system memory just can’t handle walking and chewing gum at the same time — or in this case, streaming music over Bluetooth while receiving notifications. That’s the phone’s fault, not Pioneer’s. We’re glad the app stopped it. 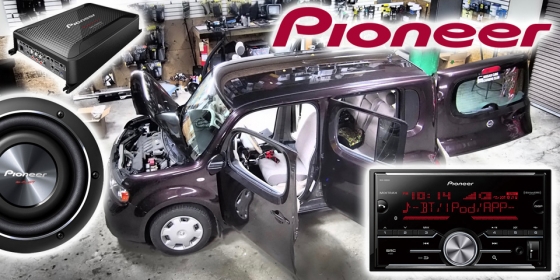 For about $1,000, you can put a stealthy sound system in your budget-friendly Nissan that would rival any fancy-pants factory setup from luxury automakers. The only difference is your Nissan (or Ford, or Toyota, or whatever) probably will let in more road noise than, say, a Lexus. But that’s why there’s a product called Dynamat — which may be coming soon to our test cube.

Thanks to Pioneer for providing the product which made this project possible.