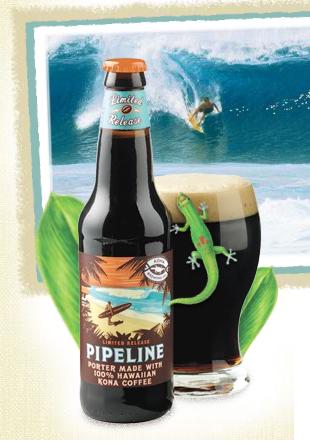 A few things about me: I’m a coffee snob, not really a beer expert, and I love Hawaii. So when a beer league ice hockey teammate brought Pipeline Porter with 100% Hawaiian coffee into the locker room after a game, I knew I had to give it a try.

You know those beer commercials where the background changes when you take a sip? Suddenly, instead of a nasty locker room, I was standing on the Big Island, enjoying a sunset while tasting Kona coffee beans – in my beer!

Not only would I recommend this beer to coffee lovers, but also to those who generally don’t like dark beer. This isn’t a bitter, ‘acquired’ taste brew that you need to swish around and wonder if you want to finish it… none of that in this. If you like the bean, you’ll like the brew. So it’s too bad that it’s only in limited release.

Here is more about the beer for those who understand this lingo:

Pipeline Porter is smooth and dark with a distinctive roasty aroma and earthy complexity from its diverse blends of premium malted barley. This celebration of malt unites with freshly roasted 100% Kona coffee grown at Cornwell Estate on Hawaii’s Big Island, lending a unique roasted aroma and flavor. A delicate blend of hops rounds out this palate-pleasing brew.

The beer has also won a few awards, including a couple a the Australian International Beer Awards. See more about Pipeline Porter from Kona Brewing Company.