Pittsburgh Steelers to Cameo in “The Dark Knight Rises”

Home of your Gotham Rogues.

According to Fox News the latest Batman installment, The Dark Knight Rises, will feature some football players that might look pretty familiar. The report states that nearly a dozen members of the Pittsburgh Steelers will appear in the film as the fictional Gotham Rogues and will compete against the fictional Rapid City Monuments.

Sports? In a Batman film? The first thought that jumps to mind is when Batman and Robin had skates pop out of their boots (so stupid) to chase down Mr. Freeze in one of the most cringe worthy moments to be seen on film. Thankfully, we can breath easy knowing the greatness Christopher Nolan has already brought to the big screen.

The film’s executive producer, Thomas Tull, is a member of the Pittsburgh owners group and desired to see his team involved in the film. The setting was none other than Pittsburgh’s Heinz Field and required a few thousand extras to appears as fans in the stadium. The field itself, pictured above, is got a complete makeover in order to give the appearance of being the home of Gotham’s beloved Rogues.

The Pittsburgh Post-Gazette reports that players such as Ben Roethlisberger, Hines Ward, Troy Polamalu and several others are believed to be the new members of the Gotham Rogues. The filming occurred on Saturday and you can see the PPG for much more information.

We aren’t positive what role a football game might play in a Batman film except for a potential bomb threat, and in an effort to prevent from spoiling the film, we didn’t go into much research to find out. Either way, it’s pretty interesting to see some very well known athletes appear in what likely will be one of the most talked about films of 2012. 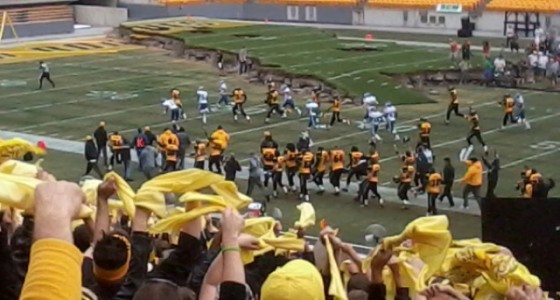