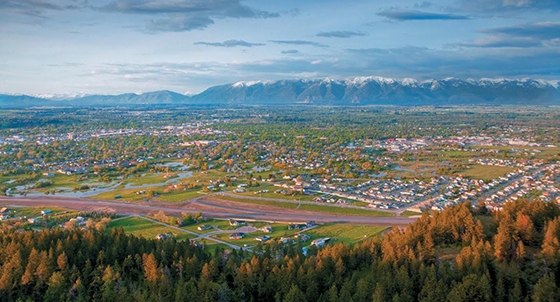 Sitting high up in the Rocky Mountains, nestled inside a valley created by glaciers eons ago and surrounded by natural beauty is the town of Kalispell, Montana. This remote town is closer to Canada than California and resembles more of what you would expect to find deep in the Swiss Alps. It is the definition of a “destination” city with very few roads leading up to it and serviced by only a small airport with a few flights a day. With its natural beauty, numerous opportunities to explore the outdoors and a historic downtown, visiting Kalispell is an experience one will never forget.

Officially, Kalispell sits at 2,956 feet above sea level, and is the county seat of Flathead County. It is the largest town in Northwest Montana with a population of 22,052 people according to a 2015 Census – the Flathead Valley is home to approximately 140,000 people. The city sits along the mountain valley and it is so far northwest in fact, it is only 74 miles from Canada. That is closer than the next largest U.S. city of Missoula, MT at 116 miles away.

The Flathead valley is quite unique in that it offers both winter and summer activities such as skiing at the Whitefish Mountain Ski Resort and water sports in Flathead Lake – the largest natural freshwater lake west of the Mississippi by surface area (ranging from 191.5-197 sq. miles depending on water levels). Plus, it is only 31 miles from Glacier National Park which encompasses over 1 million acres of land and two sub-ranges of the Rocky Mountains. This nature lover’s paradise is home to over 130 named lakes, more than 1,000 different species of plants and hundreds of different animals.

We recently made the trek north to the mountain town with the Salish name, a unique language found in the Pacific Northwest, meaning “flat land above the lake” to enjoy some of the outdoors with the Professional Outdoor Media Association. They held their 11th Annual Business Conference at the Red Lion Hotel bringing in a variety of outdoor media with various outdoor equipment and supply companies. The three-day conference, fortunately, focused a lot on the outdoors and we spent a good amount of time exploring the Kalispell area. 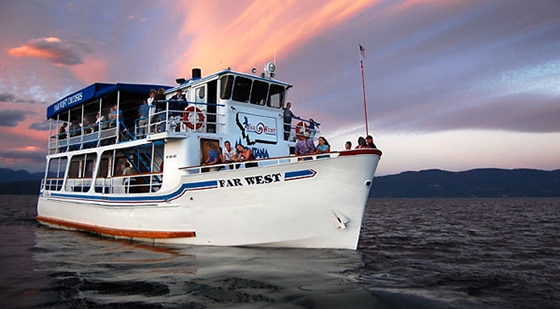 One of these trips allowed us to climb aboard a two-tiered boat, piloted by Far West Boat Tours, for a trip across Flathead Lake. Our destination was a remote dining lodge soaking in the beauty of a camp which quite literally was probably carved out of the woodlands surrounding the lake. The clear waters of Flathead Lake sparkled in the afternoon sun while the surrounding mountain peaks reflected of the water. 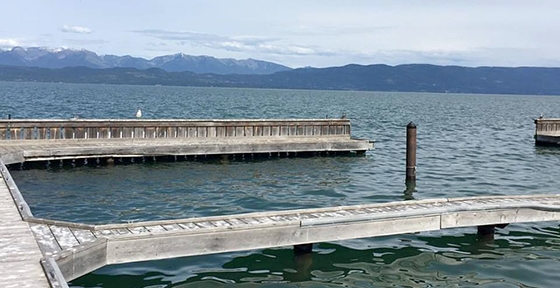 Flathead Lake’s beauty amidst the Rocky Mountain backdrop is quite stunning.

Upon arrival at the camp, it felt like we had stepped back in time with live music, wood benches and steaks on the grill. 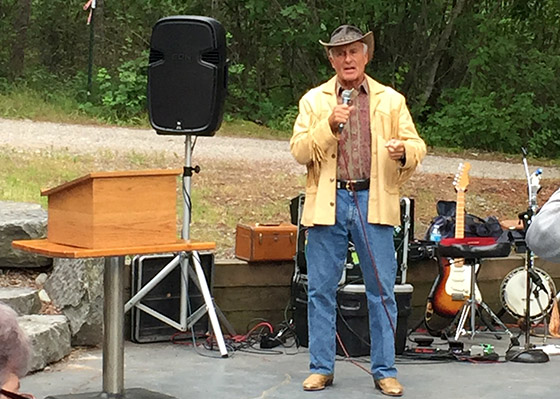 A surprise appearance by Jack Hanna truly added to the evening’s delight.

One of the big surprises of the night was an appearance by legendary outdoor spokesman Jack Hanna, who lives in nearby Bigfork, Montana. As he addressed the crowd, it was immediately clear why he lives in this remote area. He simply fits in with the mountain lifestyle and laid back surroundings. 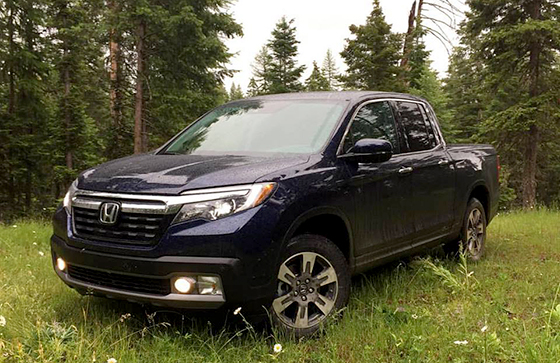 The 2016 Honda Ridgeline was quite an interesting drive compared to the typical truck and really is an SUV with a bed.

On another day, we drove out of Kalispell and into Glacier National Park in a 2016 Honda Ridgeline to explore some of the dirt roads and trails deep in the woods. The all-new Honda truck was up to the task of handling the dirt roads and rocky trails while providing a ride quality similar to an SUV. While it is clearly a different take on what a truck is, it is an interesting option for those who don’t want a traditional body-on-frame truck. 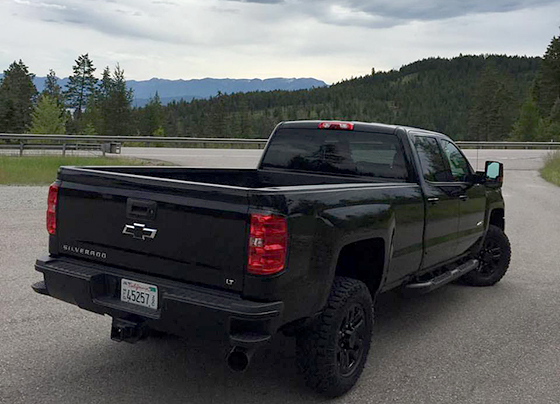 We also took both a 2016 Ram Power Wagon and a 2016 Chevy Silverado 2500 HD off-roading on local trails. These traditional body-on-frame trucks easily handled anything we threw at them with the Power Wagon barely grunting as we climbed over a hilly trail. The massive Chevy Silverado, with its crew cab and 8’ bed, turned plenty of heads as we drove through nearby small town of Whitefish, and was only dwarfed by the mountain backgrounds. 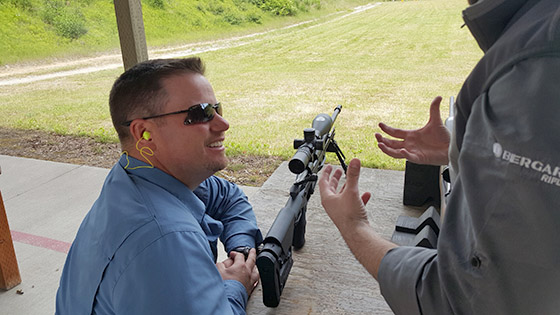 Receiving hands-on instruction from a gun manufacture on how to fire their weapon is pretty amazing.

Finally, one of our best days found us firing guns at a local shooting range. While  we enjoyed shooting the assault rifles and learning about new ammunition, our personal highlight was firing a lever-action Winchester rifle similar to those fired by early trappers, hunters and cattleman who lived in the area. We also shot trap and had a memorable experience of watching a doe, curious about the noise we were making, come out of the woods and stand directly below the clay targets flying overhead. No shots were fired at the doe and instead we all marveled at its beauty.

At night, we enjoyed the cool mountain air with warm beverages by a fire. Camping out just outside the hotel may have seemed awkward in other places in the country, yet in Kalispell it seemed natural.

The mornings were cool and chilly waiting for the sun to climb over the mountain peaks to bring its warm into the valley. Most of the locals were clad in multiple layers with long shirts and pants even though it was July. While it can get warm there, the record high is 105 degrees for July, it averages 81 degrees during the summer and below freezing in the winter with an average of 55.8 inches of snowfall each year.

We didn’t get a chance to walk the downtown, but driving through Kalispell a few times, we could see the old buildings and shops displaying their goods. Many of these store fronts are historic and come from the days of its founding back in the spring of 1891 by a businessman and a banker. This old railroad town was incorporated to serve the Great Northern Railway which connected St. Paul, Minnesota with Seattle, Washington. 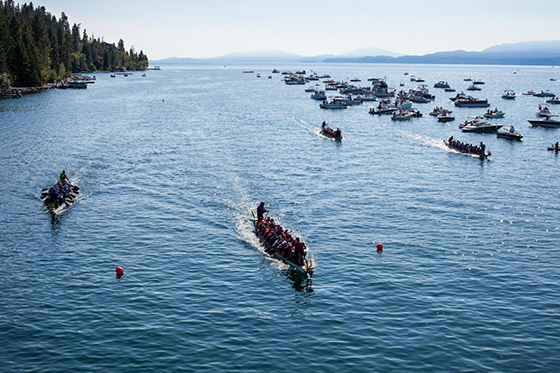 While our trip was somewhat limited due to the conference, looking over the visitors guide puts many thoughts of returning in our minds. For example, they have a dragon boat festival in the fall, and a three-day pond hockey tournament in January looks pretty interesting. As do the many local breweries, wineries and distilleries to explore.  If When we make it back to this mountain oasis, we will be on a mission to explore everything it has to offer including a few days hiking in Glacier National Park.

For more information on Kalispell, Montana visit DiscoverKalispell.com or search for the hashtag #discoverkalispell.