On February 02, 2010, Lionsgate released the new Marvel Direct-to-DVD animated movie based on the “Planet Hulk” comic book storyline. “Planet Hulk” is Marvel Animation’s 7th production and the 3rd starring everyone’s favorite Jolly Green Giant. How was it; is it worth your time; and just how much frontal nudity is there to be had? Read on if you really must know, but for all of you too busy to make it past the first paragraph, the answers are: Meh, Not Really, and Shockingly None. 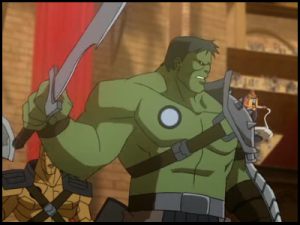 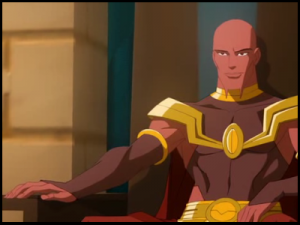 In “Planet Hulk” a betrayed warrior falls into slavery and is thrusted into the world of bloody gladiator fights in a far away land. Though reluctant at first, he soon picks up the sword and carves his way through legions of other warriors, just waiting for a chance to kill the evil Emperor and avenge his murdered family… no wait, this is the plot to Ridley Scott’s “Gladiator”. Hang on… OK, so…

(…) carves his way through legions of other gladiators, just waiting for a chance to kill the evil Emperor and avenge his murdered family smash some things. Much better.

Don’t think anyone here is suggesting that “Planet Hulk” is a rip-off of “Gladiator”, because there are important differences between the two. For example, in “PH” Iron Man puts the Hulk into a rocket, sending him off to another world so he wouldn’t hurt more people on Earth, while we’re sure Scott’s movie was set in dinosaur times when they didn’t master space flight just yet.

Of course, “Planet Hulk” doesn’t have a multilayered story, charismatic performances by talented thespians or a tragic yet satisfying ending like Scott’s flick did… But it does have Hulk breaking things. So… there is that. 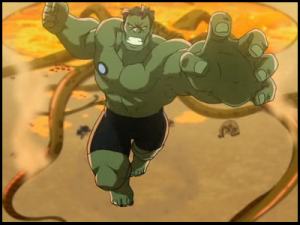 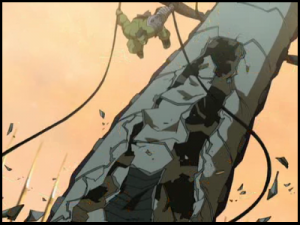 Alright, so the movie does not suck you in with a clever plot, but so what? This is Hulk we’re talking about. As long as a big green monster (whom you wouldn’t like when he’s angry) gets to destroy lots of private property in spectacular ways, the plot can go kindly copulate itself in the corner.

So what does “Planet Hulk” offer us in terms of action?

A giant, adequately animated “Meh”. The hook here was apparently the fact that Hulk was severely weakened when arriving at the movie’s despotic planet, but the concept is virtually abandoned roughly 5 minutes in, together with any semblance of drama or suspense. Hulk still jumps around, punches his enemies to death and takes less damage than a radioactive supertank on steroids, making you sooner root for his enemies than for this instinct driven force of destruction.

At least in “Hulk vs.” they pitted him against some of Marvel’s finest experts of death like Deadpool or the Norse Gods. Who does he get to kill here? Robot wildebeests. 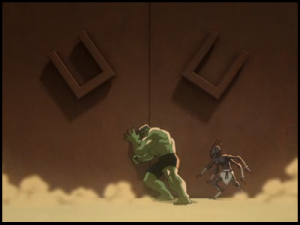 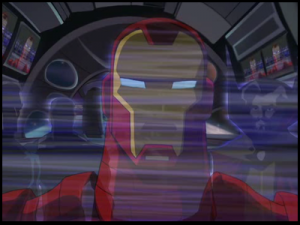 So let’s assume that you have a very specific form of brain damage which forces you to purchase anything even remotely connected to The Hulk, despite what you’ve read until now. And you want to know, is “Planet Hulk” accessible to people who might not know that much about comic books because they spent their adolescent years playing sports and touching female breasts?

Let’s put it this way. “Planet Hulk” couldn’t get less accessible to new fans even if it was locked in the most secure sectors of Fort Knox, which has been relocated to the dark side of the Moon, covered with a titanium dome and encased in concrete.

The first thing that might confuse casual viewers is that Hulk can talk, and not just things like “Hulk smash”. We’re talking about fully fleshed sentences here, proving that the monster has intelligence. This undoubtedly makes a lot of sense to the fans of the comic book but to everyone else it causes both confusion and further suspicion that “PH” is “Gladiator” in space with Russell Crowe dunked in green paint.

But the confusion new fans will feel is going to only get worse. Much worse. 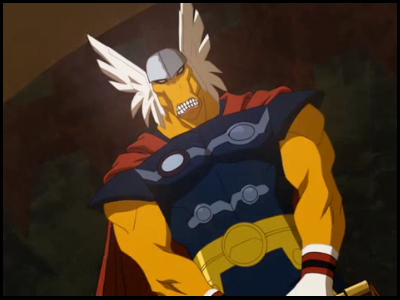 That… yellow anthropomorphic horse in a Thor Halloween costume (we will need a minute… apparently our brains just committed suicide after having to think about that sentence)… is the final boss Hulk has to smash in the arena. What the fuck is it, why does it look like that and how dare the writers insert this thing in the middle of the movie without a satisfying explanation? Nobody knows. 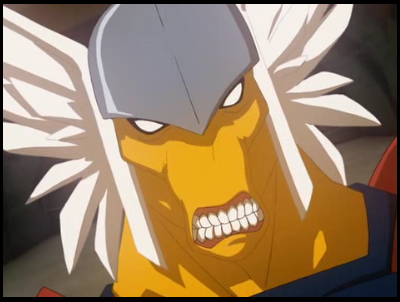 Marvel’s fans of course know that the creature is Beta Ray Bill, but it means nothing to people who only know what a “Hulk” is (more or less) thanks to the animated series all those years back, and even that incarnation of the character is nothing like Hulk in this movie. This will cause nothing short of pants wetting confusion and TV targeted violence, meaning that if you value your property, do not purchase the “PH” DVD. Unless you are in need of a colorful coaster and are a fan of irony.