Sports > Football > Play Like You Mean It : Sacks, Snacks and Laughs

Play Like You Mean It : Sacks, Snacks and Laughs 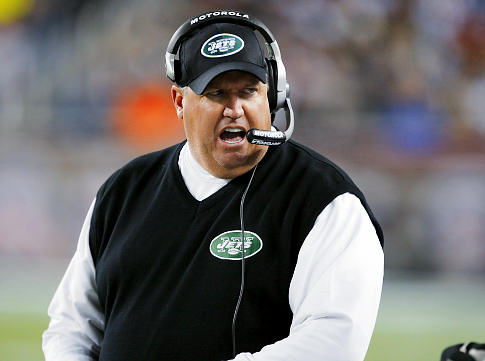 Many people have asked the question, why is Rex Ryan writing a book? Did I miss the part when he won a Super Bowl or has been a head coach for more than two years? I disagree with the sentiment. If there are enough interesting things that have occurred in your life to merit writing a book, than more power to you. Rex is Buddy Ryan’s son, spent ten years as an assistant on a very good Baltimore Ravens team, and has had more than enough headlines surrounding himself and his team in two years of being a head coach to put out a book worth reading. 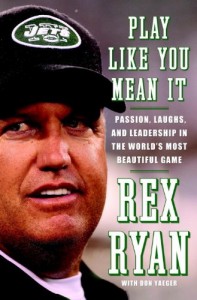 This book is going to have a different type of appeal to you, depending on where you are coming from. If you are a New York Jets fan, it is a no brainer to read this, even if you aren’t crazy about Rex’s personality (then again which Jets fan doesn’t love the guy?). It provides insight into the how the organization is run and gives an entertaining walk through the 2009 and 2010 season, while touching on many members of the past and current roster. If you are a NFL fan, Rex’s love of the game is infectious and he provides enough history and discussion of other teams to make it enjoyable. Beyond that, if you get a kick of the guy, you will continue to enjoy his brash sense of humor.

For Rex’s haters and we know there are plenty out there, this book is perfect fodder to tear the guy apart. Similar to how he deals with the media, he  relentlessly talks himself, his family, his players, and his teams up. Coming from somebody who has heard or read every Ryan press conference the past two years, this book reads like a 270 page synopsis of everything he has consistently preached.

Rex believes in himself and the way he does things. There is no hesitation to call New York a Jets town, talk about kicking any or everybody’s ass, and continue to guarantee the Jets will eventually be champions. There aren’t too many humble sentences in this book, yet Rex still doesn’t come off as disrespectful because of the praise mixed in for his opponents the game of football itself.

This isn’t the best written piece of literature you will stumble across. It jumps all over the place at times and has a tendency to be repetitive. The book is at its best when Rex is doing what he does best: talking defensive strategy, firing up the observer (especially if you are a Jets or Giants fan), and having a sense of humor.

For example, you can’t be a Jets or Giants fan and not be counting the seconds until this Christmas Eve when the two teams face off after reading the chapter “Sharing the Big Apple.” One choice excerpt…

Who isn’t ready to start storming courtrooms to make sure this upcoming season isn’t messed up and these two teams meet on December 24th? More generally, when Rex talks about his dedication to work, you can see why players respond to him so well and appreciate the way he goes about his business.

His sense of humor shines through the best when he is poking fun at himself for his battle with weight problems. Whether it is talking about taking a Playboy bunny for pancakes before he was fat or rambling in a cartoonish manner about the food he loves “I just love tacos. Then there’s pizza and lasagna. Yeah, just pour on the carbs.” He refers to himself as resembling a refigerator and doesn’t shy away from discussing how much his weight has fluctuated. Rex also discusses his battle with dyslexia. For all his boasting throughout the book, he doesn’t shy away from his problems, which provides some much needed balance to the book.

If you hate Rex Ryan, you will hate him more after this book. If you love Rex Ryan, you will still probably shake your head a few times but come away thorougly entertained. If you are a New York Jets fan, you will feel good about where your team is headed. Finally, if you are a member of the New York media, you can remain confident you won’t have a shortage of quotes in the coming years.