The Podium Girls of Cycling

If you have been watching the Tour de France, you may have noticed the sexy Podium Girls at the end of each stage. That’s right, Cycling uses beautiful women to present the prizes to the winners of the colored jerseys each day. The Tour’s podium girls are selected by the race organizers from over 500 applicants every year. With podium ceremonies being held for each of the 4 colored jerseys, there are several women to choose from. They are each sponsored by a company; LCL for the Yellow Jersey, Carrefour for the Polka-Dot Jersey, PMU for the Green Jersey, and Skoda for the White Jersey. USA Today reports more on these ladies: 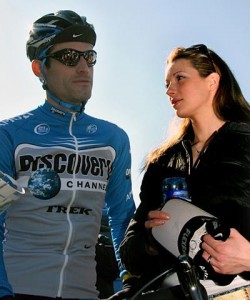 The women are not allowed to go beyond the friendly kisses they pass out, but once in a while true love blossoms. In the 2003 Tour, U.S. Postal rider George Hincapie noticed a beautiful woman when she handed him a stuffed lion. I was mesmerized by her,” he says. Melanie Simoneau thought Hincapie was pretty cute, too. He passed her a note, and soon they were a pair. But Credit Lyonnaise officials dismissed Simoneau for fraternization with a rider.

The two are now married and have two children. For more on the life of a Podium Girl, check out this interview from Pez Cycling, and the video below:

A few years back, Slovakian Sprinter Peter Sagan attracted some negative attention by playfully pinching the backside of a Podium Girl at the Tour of Flanders. He later apologized, but the photo will probably live on forever : 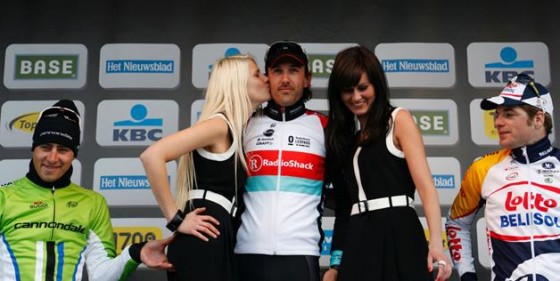 In order to celebrate the Podium Girls and the 104th Tour de France, we have created this gallery, which includes 100 photos from the Tour de France, and other cycling races around the world.