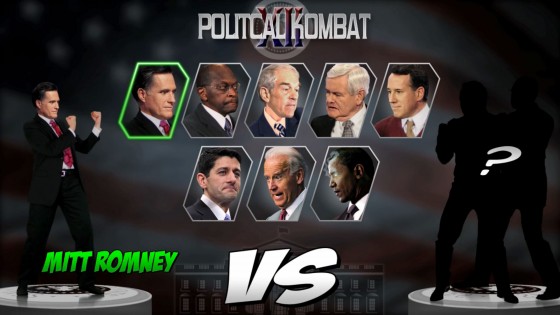 From the folks at Slate comes this brilliant take on the Presidential Election season, set as Mortal Kombat. There is so much hilarity in here, we had to watch it a few times, although it’s way funnier if you paid attention to the Primary season (which apparently very few Americans actually do) and we’ll have to wait a few more weeks for additional episodes. This first video features Mitt Romney vs. Herman Cain and Rick Santorum :

Everything about this is just perfect. The animation is excellent, the information is accurate, and the jokes are hilarious. Amazing job by Slate.

In Episode 2, Romney does battle with Newt Gingrich and Ron Paul. Episode 3 imagines a fight between President Obama and Donald Trump. And in the coming weeks, we’ll stage a fight between Joe Biden and Paul Ryan as a prelude to a battle royale between Romney and Obama. Stay tuned.