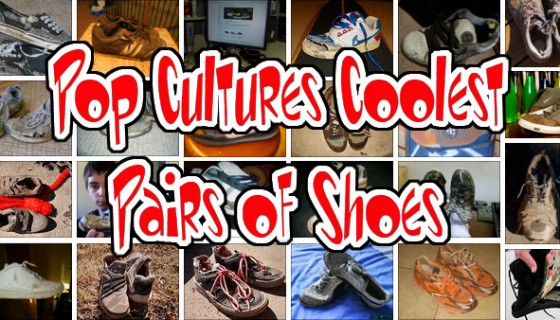 Since man realized he really ought to put something on his bare feet lest he rend his tender flesh to ribbons, he has been coming up with better, more convenient, and far more comfortable ways with which to keep his dogs safe. From the earliest forms of sandals and slippers, to the most expensive pairs of basketball shoes, the footwear industry is easily not only one of the most blatantly costly outerwear producers around, but also within the most prolific visual status symbols. When movies and TV picked up on the trend, well, a new legend was born. Here are the greatest pieces of fictional footwear (both for men and women) the world has ever seen.

Wait till the end of this clip… well, the rest of it is classic anyway, so it’s no big deal. Benny’s PF Flyers -a classic pair of shoes- help The Jet outrun the beast in one of the greatest baseball films ever: The Sandlot.

What do you get when you coat a pair of ordinary basketball shoes with the bounciest substance known to science? Well, aside from a catastrophic basketball game, you get some seriously sweet kicks.

Let’s say you need to get from one block to another as quickly as possible and you’re neither the Flash nor Superman, however, what you do have is a body made out of various gadgets. Well, I think you know what to do…

Nothing screams classy when you are a solid pimp like your ensemble. Especially when your outfit includes a pair of plexiglass Disco boots that come equipped with a live fish. Yeah, they’re from I’m Gonna Get You Sucka. 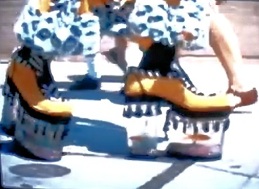 The movie was Space Jam. The concept was ridiculous in its simplicity: Have the Looney Tunes characters use Michael Jordan in an inter-galactic basketball game against a bunch of space monsters. Also his shoes help, too. 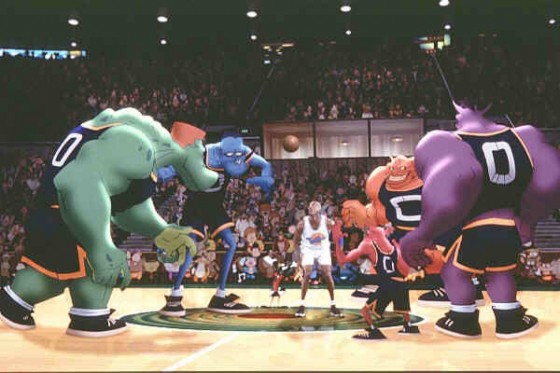 Voiced to feline ‘purr’fection (sorry) by Antonio Banderas, Puss in Boots joined the heroic team of Shrek and Donkey in the franchise’s second outing. His original position was the would-be assassin of Shrek hired by Fiona’s angry father. But, thanks to Shrek’s assistance, Puss befriended the ogre for 2 more flicks.

“Who throws a shoe? Honestly!”

Though they seemed really cool at the time, really, shoe phones you actually have to remove from your feet seem incredibly inconvenient.

On the Nick hit, iCarly, one episode featured Carly, Sam, and Freddie getting paid oodles of cash to hock Daka’s Techfoots on their webshow. However, after a few days of use, it becomes apparent that the shoes are absolute garbage and the trio decide to deride the footwear while still keeping within the parameters of their contract. Look, despite what any of you think (including Phil -ahem-) this show is really funny, super popular, and fun, especially if you, like me, have kids. So there!

When Judge Doom -in the classic Who Framed Roger Rabbit- finally creates a way to utterly destroy an otherwise indestructible toon (think paint thinner: turpentine, acetone, and benzine), he tests out his diabolical ‘Dip’ on a hapless squeaky shoe.

On his miraculously stupid journey to locate his presumably stolen bike in the basement of the Alamo, Pee Wee end up breaking the world record for bull-riding and runs afoul of a biker gang (after accidentally knocking over their motorcycles). Fearing they are trying to kill him, Pee-wee dances to “Tequila” in enormous platform shoes and wins the respect of the bikers. The bikers give him a motorcycle, but Pee-wee quickly crashes it. Pretty convoluted for a Tim Burton flick. Wait, no it isn’t at all.

Though primarily just a pair of leather shoes with leg braces attached, were it not for Forrest’s escape from said confinements he may have never started running in the first place. 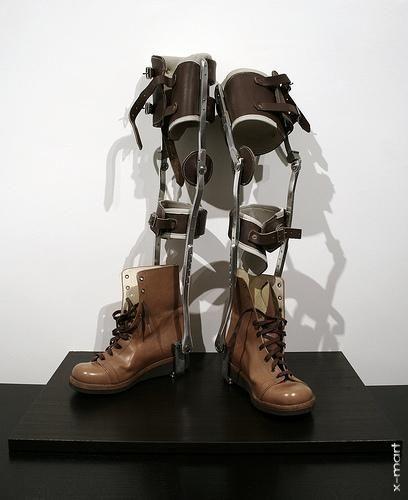 Susan Murphy is hit by a radioactive meteor on the day of her wedding to weatherman Derek Dietl, absorbing a substance called quantonium and growing into a ’50-Foot-Woman’. Alerted to the meteor crash, the military arrive and capture Susan. She is labeled a monster and renamed “Ginormica”. After befriending her new monster captives while aiding the military in destroying marauding aliens, Ginormica finds she can use vehicles as ‘skates’ to get along far faster.

This tidbit from Wikipedia “…When the Grand Duke arrives, the mice steal the key to Cinderella’s room from Lady Tremaine’s pocket and laboriously drag the key up the stairs to her room, only barely managing to free her after a fight with the Stepmother’s cat Lucifer, in which Bruno comes to their rescue and scares the evil cat out of the house. Meanwhile, Anastasia tries on the slipper, but her foot is too big. Drizella tries on the slipper, and finds her foot is also too large. As the Duke prepares to leave, Cinderella appears at the top of the stairs, asking to try on the slipper. Knowing that the slipper will fit and that Cinderella will marry the Prince, her stepmother insists she’s just a servant girl. The Grand Duke sharply reminds her that every maiden is to try on the slipper. As the footman bring the slipper to Cinderella, her stepmother trips him, causing the slipper to drop and shatter on the floor. Cinderella then reveals she has the other glass slipper. Delighted at this indisputable proof of the maiden’s identity, the Duke slides the slipper onto her foot, which fits perfectly.” This of course all takes place after Cinderella rushes away from the Prince’s ball just before midnight leaving a slipper behind. It’s interesting to note that in the original Fairy Tale, the two sister actually slice off chunks of their feet to fit the shoes. Nice.

From the moment Dorothy arrives in Oz, by way of Munchkin City, she is adorned with a magical pair of ruby shoes that appeared on her person just as the Wicked Witch of the East’s legs curl up under the house that smashed her. The Wicked Witch of the West wants them returned immediately, however, such powerful footwear will not be removed so easily.

When Jan, Todd, Landfill and Barry head to Germany for Oktoberfest, they come into some fierce competition against the original brew-masters, the Wolfhausen’s, over the true ownership of an amazing beer recipe. Das Boot; and the beer chug therein, is but one part of the beer-style Olympics they participate in to reclaim their recipe.

This from Wikipedia: “Star Trek VI – The Enterprise rendezvous with Gorkon’s battlecruiser and proceeds towards Earth, with the crews sharing a tense meal aboard the Enterprise. Late at night, the Enterprise appears to fire on the Klingon ship with a pair of torpedoes; the damage disables artificial gravity aboard the vessel. During the confusion, two figures wearing Starfleet suits and gravity boots beam aboard the Klingon ship and wound Gorkon.” I remember tis scene in particular when the gravity is restored all the green Klingon blood drips to the floor.

Finding himself trapped in 2015, Marty must adapt to achieve his goal of stopping Biff Tannen’s boy, Griff, and Biff himself, from getting a hold of a Sports Almanac thereby going back in time to bet on a baseball game earning him fame and fortune. In doing so, Marty straps on a pair of Nike’s from the future and jumps on a Hover-Board.