WWW > Podcasts > Poser’s Guide to Music – Masters of None

Poser’s Guide to Music – Masters of None

[podcast]http://www.podtrac.com/pts/redirect.mp3/media.libsyn.com/media/mastersofnone/MON_4_8.mp3[/podcast]
Masters of None – 4.8 – The Poser’s Guide to Music

Walk into a heavy conversation about music and it’s easy to become lost. Name Droppers and Music Snobs really flex their idiot muscles during these rare chances to put you to sleep with their incessant nagging of why The Shins are a good band or why anything Nirvana did post Nevermind was an exercise in futility. These people will die a lonely death and it’s best to just stand there, furrow your brow and nod them out of existence. But if you dare to engage these freaks mano-y-dorko, this week’s epsiode can help you hold your own. That is, until they break out intimate details on the guitarist from Built to Spill’s dietary needs. At that point, just throw down a smoke bomb and disappear into the night like Darkwing Duck. Trust me, they’ll still be talking long after you ordered your third beer.

Enemies of the State

Here are examples of a few people to shy away from when you want to talk about music.

The Hipster – Looking for someone to create interesting and ambient sounds on a synth they got at Sam Ash that sounds like Phillip Glass falling asleep on his Casio? These guys are your “man.” Want to drink absinthe and smoke clove cigarettes with a guy who majored in post modern womenest thought? Look no further. Need help moving your couch or any other kind of manual labor? These aren’t the droids you’re looking for. Move along.

Goths / Metalheads – Before you start with “these two groups are TOTALLY different”… Save it. You both wear black. You both go to Ozzfest EVERY year. You both listen to Ministry and HIM but empathize with their music on two totally different personal and spiritual levels. BLAH BLAH BLAH.  Shut up. Bottom line is that both of you work overnights mopping floors at a 7-11 only one group likes to pretend they’re vampires while stealing the V-8 out of the back fridge, while the other steals Drakes cakes and wings the V-8s at the houses of jocks from English class on their way home. Both of you hate your parents and need some sun. You bring nothing to the improvement of society

Hippies – Holy shit you stink. I mean literally. These homeless people are the only group left that actually celebrates Earth Day because they’re SOOOO environmentally conscious. Meanwhile their idea of celebrating is by getting a bunch of buddies over to gather around “Donkey Bong” which of course is the new homemade bong made out of a banana peel and duct tape. Then they’ll  sit and watch the Wizard of Oz on mute while listening to Darkside of the Moon because “Holy shit MaaAAAaaNnn, it matches up!” Guess what? It doesn’t. I could literally take any album, an eighth of shwag and a bottle of bourbon and that would work. “Holy shit! The Tin Man’s dance totally matches up with The Simpson’s Sing the Blues!” Oh and good luck putting that Jam Band and/or Drum Circle together. Just because you own a djembe and have seen Ozomatli 12 times in concert doesn’t make you a musician. And get off my couch!

This guy's smell will penetrate your firewall

Classic Rock Guy – This is the group that believes  Rock and Roll music achieved perfection in 1976 when Boston’s first album came out. They shout “Freebird” at a concert and mean it. They usually put a second mortgage on their house so they can buy a Harley with a sidecar for their fat wives to sit in on their way to Sturgis while listening to Foghat’s greatest hits. Or worse yet, they think Carole King was the greatest song writer ever and love everything Chicago has ever done. Even the Peter Cetera/Weather Channel-local-on-the-8’s bullshit. Seriously folks, give it up. The dog is laughing at you at this point.

Queensryche fans or is it actually Queensryche? Who cares?

There are literally a million other groups I could bash but I think that will do for now. For more check out The Poser’s Guide to Music and see what tips we can give you to hide amongst these cash crops of mediocrity.

What the hell are these pictures about? Listen to the show to get the joke, silly. 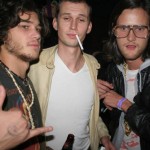 You learn something new everyday