Here’s how you go into The Predator: lose all preconceived notions or expectations of this new installment matching the primal, exciting narrative flow of the original Predator, its 1990 sequel, or even 2010’s surprising Predators. Instead, settle in for near-constant blinding action. The first-ever on-screen Predator victim Shane Black – writer of Lethal Weapon, which was just leaving theaters by the time Predator was released in 1987 – returns to the franchise after a 31-year hiatus. Black, serving as director and co-writer, eschews the typical fat which pads the runtime of most summer releases and goes straight for the carnage. 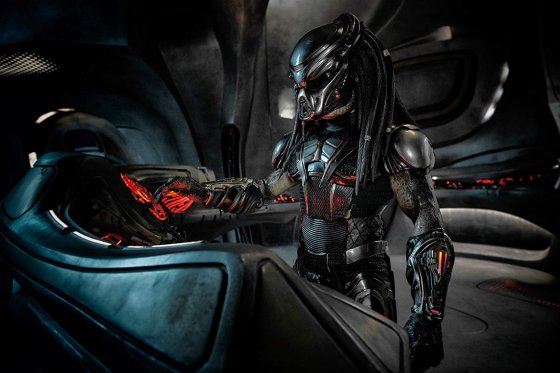 Ain’t no stopping this rocket of a film which starts off at a leisurely 1,000 miles per hour with the brakes stripped and mangled. Between Black’s furious direction, a barebones script co-written with Fred Dekker, roller-coaster-smash editing by Harry B. Miller III and Billy Weber, and Larry Fong’s frenzied cinematography, the pace lies somewhere between Spaceball One’s Ridiculous and Ludicrous Speeds. This also gives us little time for Black to sell us on his characters; we’re thrown immediately into the damage path with pretty much a lick’s worth of character establishment. We barely know the good guys from the bad (both human and Predator) – much less their intentions – before the first unlucky bastard is seen hanging disemboweled from a tree. 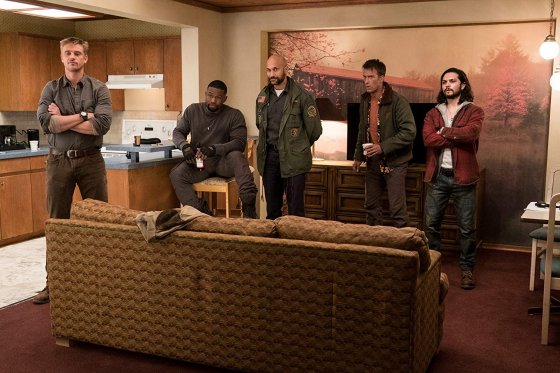 One gets the feeling Black is not only making what feels like a summer blockbuster, he’s also taking the piss out of such endeavors. Do we need to know everything about everyone? No. Do we need to know why, suddenly, an RV becomes the mode of transport for a gang of prison escapees? Not necessarily. There’s a naked woman hunched over in a decontamination chamber, but we only see her from her shoulders up. Is this Black turning convention on its ear? Yes. He even gets a little kid involved in the ways Jurassic Park and other films have children vital to their endgames and climaxes. Black uses a lot of well-worn tropes to define his characters; as he’s done in his screenplays since Lethal Weapon, he finds new ways to put his own spin on them to make them unforgettable. 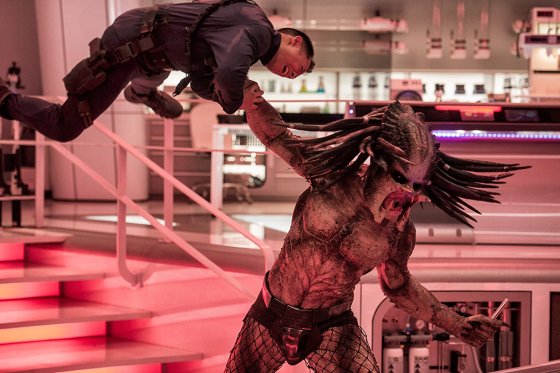 Only this time, surprisingly, there’s not much to remember. It’s an easy setup, with a Predator coming to Earth and doing what it does best – hunting humans – before a group of people fight back. Fairly standard as Predator films go, eh? But Black’s script and execution makes The Predator feel like it’s dragging us along as it runs amok, daring us to keep up, where its predecessors enticed us and willed us to come along. There’s no slowly-developing world-building; there is only the Now, in which we find Army sniper Quinn McKenna (Boyd Holbrook) detained by a covert government program codenamed Operation Stargazer. Lest you wonder, you will see why he’s being shipped off to the Stargazer facility: he’s the only man from his unit alive after an encounter with a just-crashed Predator and his ship. 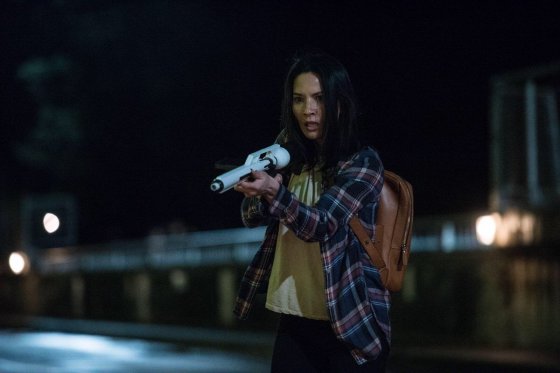 We’re set up with Dr. Casey Bracket (Olivia Munn) as a way into seeing what Operation Stargazer does. Sadly, there’s not much of a point to her other than to be the outsider’s eyes looking in on this adventure; she’s constantly on edge and pissed off, and we don’t quite know why. We don’t even know what the heck she’s doing when Operation Stargazer chief Will Traeger (Sterling K. Brown) comes to collect her, showing her data and speaking so condescendingly to her. Well, he’s like that with everyone, so of course, we’re rooting for him to die a slow, agonizing death at the hands of a Predator, right? 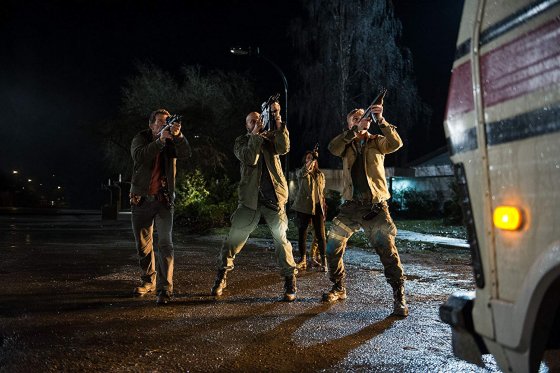 In a daring effort to give himself a bargaining chip against the people he knows are coming for him, McKenna mails some of the Predator’s tech to his estranged wife Emily’s (Yvonne Strahovski) house. However, their autistic savant son Rory (Jacob Tremblay) gets his hands on it and starts tinkering away with genius ability. Rory’s capable of much more than his peers think; he resets overturned chess games, he finishes math workbooks on a whim, and now, he’s successfully figuring out how the Predator’s mask and wrist gauntlet work. Which, of course, sets off a chain reaction of Operation Stargazer, his imprisoned father and his new “squad,” and the mother of all Predators heretofore seen all going on the hunt for him. 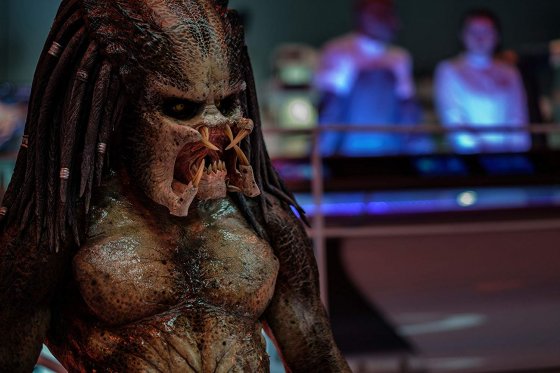 The film itself is an odd parallel to the 1987 original in every way, except for the gargantuan muscles. A white soldier gets (sort of) recruited by a black man and thrown into a transport with other grunts who suddenly have to fight a battle way different from the one they were expecting. In the original, a sweep-and-clear mission gets sidetracked by a Predator suddenly on the hunt; in this film, these men – “Group 2,” as they’re called by “Nebraska” Williams (Trevante Rhodes) – are about to be disappeared by Stargazer operatives when life starts to go sideways. Nebraska says Group 2 is their therapy designation, but it could also be read as they are – or about to be, in the Predator-only timeline – the second military unit to go up against a Predator. 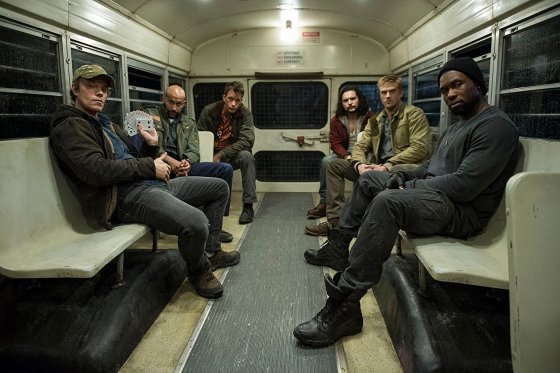 Group 2 is a bunch of military folks gone straight off the deep end, still lucid and cognizant of the world around them, but their view is slanted somewhat oddly. PTSD-stricken Coyle (Keegan-Michael Key) and Tourette’s Syndrome-suffering Baxley (Thomas Jane) form an odd couple, the former constantly spouting jokes and the latter constantly spouting badly-timed profanity. Lynch (Alfie Allen) is a master of sleight-of-hand, but it’s a plot point established and quickly forgotten just before the film’s climax. Nettles (Augusto Aguilera) is slow and lacking social skills due to injuries from a vehicle crash. Black sets these characters up with pretty neat personalities and tics, but they are, by and large, unused and left to the wayside gradually throughout the movie. 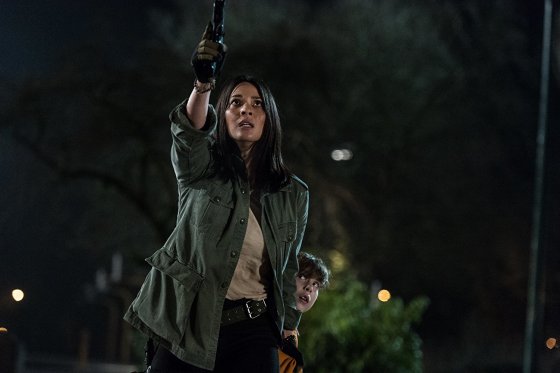 This speaks more of the possibility that The Predator, aside from being a wham-bam-thank-ya-ma’am shot of adrenaline directly into the eyeballs, is yet another example of Shane Black’s satirical whimsy. He doesn’t usually treat characters like this, so why start now? We find Black making fun of the disposable nature of current blockbusters and how easily every conflict can be solved by the deus ex machina character. Yet The Predator doesn’t totally feel like a satire; in fact, it feels very much like just another multiplex action movie, with loud explosions and could’ve-been-wittier dialogue. What was once trend-setting has now become the standard, and the film feels lost in itself. 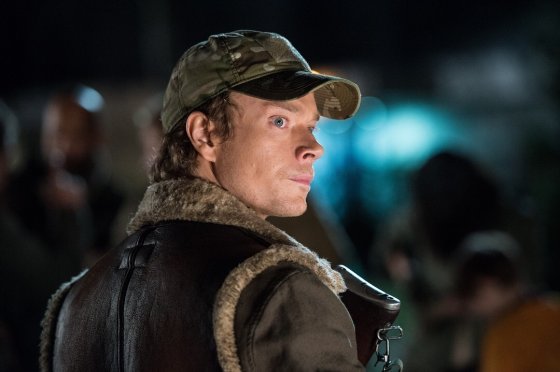 The sheer number of characters and action set pieces alone don’t give any room for the film to breathe, as something’s always happening or exploding. Absolutely no time is dedicated to letting the film be; if it’s not guns blazing, then it’s strained dialogue propelling the story to the next scene or confrontation. Jokes are told at such a high volume and lack any sort of subtlety, and everyone’s a snark master, asking and answering questions with the same backhanded, “I’m joking but I wanna kill you” attitude. The only respite from any of this is Jacob Tremblay’s sweet and charming Rory, who worms his way into our hearts and practically steals laughs and attention away from the rest of the cast. 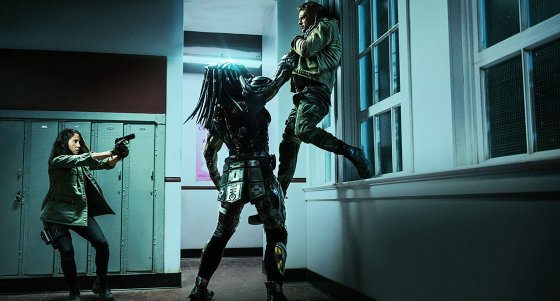 Without the personalities of the jungle and characters from the 1987 original, we’re left only with violence and gore by the bucketfuls amid the curious setting of rural suburbia. Not even Rory’s immune to accidentally killing an antagonistic character in one of the film’s more hilarious scenes. The vibe of The Predator is lean and mean, going heavy on the “mean.” It’s brutish, loud, and incessantly forced, and a film with these attributes might be just what you’re looking for. A little brutishness isn’t a bad thing. But too much of it yields exactly what The Predator has become, and it just isn’t enough to vault it into “classic” territory.

The Predator feels like it’s dragging us along with it and daring us to keep up; it’s brutish, loud, and incessantly forced, but this might be just what you’re looking for.