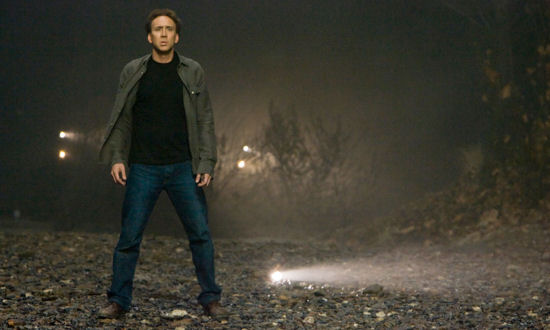 But we tend to forget Cage’s finer roles, thanks to his seemingly insatiable desire to appear in any piece of crap that will offer him a fat paycheck. His latest atrocity, Season of the Witch, has already laid claim to the title of 2011’s biggest bomb; and it’s only January. Not content to quit while he’s behind, Cage is slated to star in another three movies in 2011, all of which sound terrible. Just take a look at the premise for his upcoming action film, Drive Angry:

Milton (Nicholas Cage) has broken out of Hell to prevent the cult that murdered his daughter from sacrificing her baby. He is being pursued by ‘The Accountant’ (William Fitchner) a supernatural operative of Satan who has been sent to bring Milton back to Hell.

The tagline is “All Hell Breaks Loose.” No, seriously. This is a real movie. And William Fitchner is the villain. Isn’t he dead?

If that trailer is any indication, 2011 will be the year Nicolas Cage’s standards hit rock bottom and just keep digging. With his ever-plummeting dignity in mind, we’ve put together a list of the next five movies we think Cage will star in before he inevitably abandons the concept of shame completely and takes up pornography. 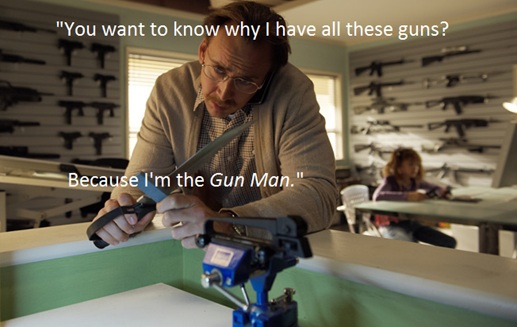 Dmitri Gagarin (Nicolas Cage) is the world’s most dangerous assassin, the world’s most notorious arms dealer and the world’s most famous car thief. But when his ex-wife, his daughter, his mentor and his dentist are all killed by gangsters, he’ll put his skills to work becoming the best in the world… at getting revenge. No man can stand in his way… except perhaps Anton McMurder (Justin Long), the world’s most criminal crime lord. There will be nothing but hard-hitting action when these two heavy hitters collide, so prepare yourself for the biggest hit of the summer!

“The Gun Man is a bunch of other Nicolas Cage movies stitched together into a Frankenstein monster that screams ‘I want to die! I want to die!’” – Gene Shalit

National Treasure 3(D): The Book of Even More Secretive Secrets 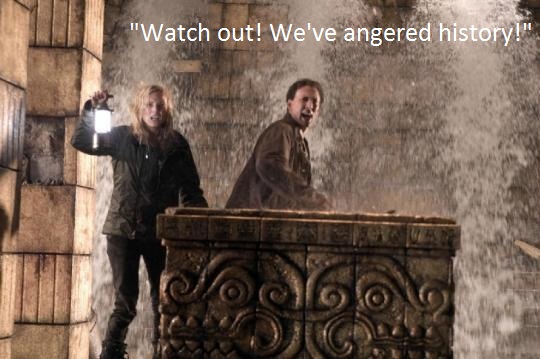 Benjamin Gates (Nicolas Cage) thought he had solved every mystery in American history… until he found a secret invisible map on the 666th page of the Warren Report. Written in a code that can only be deciphered through riddles which are written in another code that can only be read with another map, this map (the first one) will lead Gates and whatever the other characters in this series are called to a book full of secrets so secretive that all the secrets from the second movie’s book will look like secrets for pussies. These secrets will reveal the terrible truth about an ancient conspiracy perpetrated by the Illuminati, the Masons, every President of the United States, and Some Other Guys… but only if the CIA doesn’t get to them first. In fact, the secrets are so shocking, they can only be revealed… in 3D.

“Benjamin Gates is about to discover the greatest treasure of all: the truth.”

“It was just two hours of Nicolas Cage running around with a flashlight and yelling. I don’t think he even knew he was being filmed.” – A.O. Scott 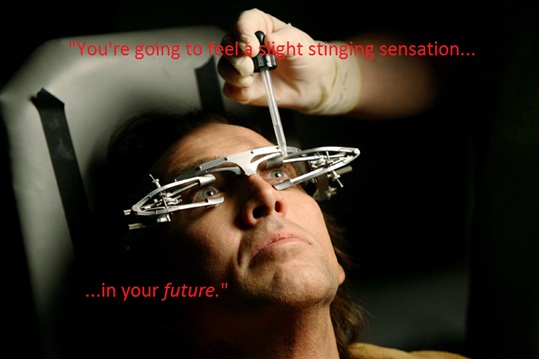 Professor Cornelius Christenson (Nicolas Cage) can see twelve and a half seconds into the future, because of math or whatever. But now that he can see the future, will he be able to change it? Plagued by visions of narrowly missed buses, phones that ring while he’s in the shower and some jerk who beats him to the last carton of milk at the grocery store, Cornelius tries to use his predictive powers to alter the course of history. But when a shadowy government agency attempts to kidnap him for Sinister Purposes™, Cornelius is forced to run for his life. Will he be able to foresee his way out of their clutches while saving the woman he loves, and also the entire planet?

“Even I hated this movie, and my opinions are terrible.” – Armond White 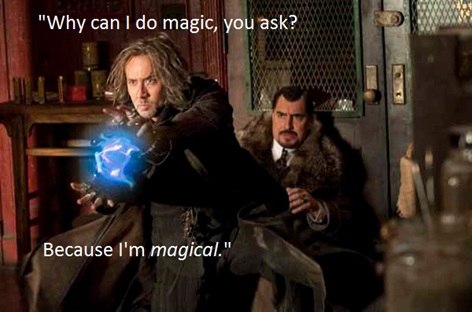 Archibald Sorcerous (Nicolas Cage) is the world’s last magician. Or so he thought. But when an evil cult brings his arch-rival, Warlock Manfred von Villainous (Tim Allen), back from the dead, Sorcerous must once again take up his wand to defend the world… only this time, he’ll need help. Sorcerous enlists the aid of a young boy with great magical potential (Jaden Smith), who he must train to become the greatest magician of all time. But they’ll have to train fast, because Villainous has plans to bring something else back to life… The Third Reich. Can Sorcerous and his apprentice stop this madman, or will the world fall into the clutches of the dreaded Necronazis?

“The world’s about to believe in magic… whether it wants to or not.” 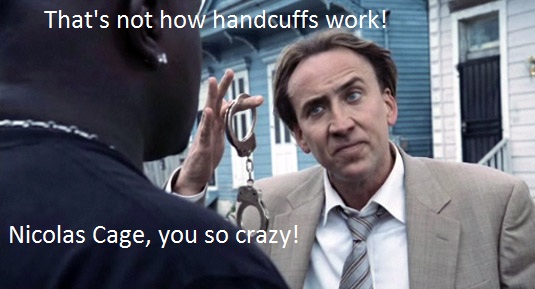 “I have no voice, and I must scream.” – Roger Ebert