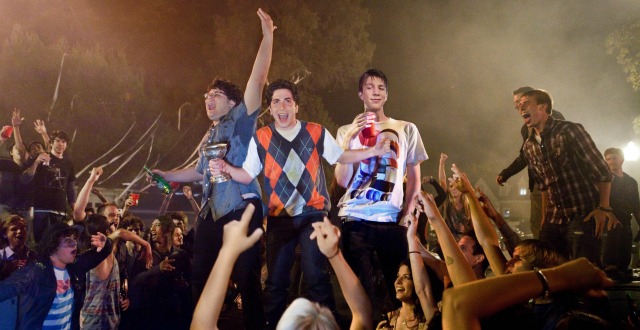 With a couple of hours to kill this week I was faced with the choice of seeing one of two movies playing at the exact same time: Wanderlust, a romantic comedy starring Paul Rudd and Jennifer Aniston, directed by David Wain, or the feature-length YouTube-esque high school party movie, Project X. Being a fan of Wain and Rudd, I wanted to vote with my wallet and support their film, but I knew that it would probably be ‘just all right’ from what I’d seen in the trailer. On the other hand, I’d have a way better time writing a review of Project X, knowing it would mostly likely suck on many different levels. As you’ve already seen from the title of this article, I chose selfishly.

Project X takes the most tired of tropes — teenagers have crazy party — and adds a modern-day spin to it, using a handheld, found-footage style of filming. However it’s not actually found footage, but rather ‘filmed’ almost single-handedly by a goth kid who has no reasonable motive for following the three tools (protagonists) around all day while also taking their abuse. Dax, who is dressed in all black and whose parents are “missing,” also has the Steadicam skills of a monkey on speed. This was obviously a conscious decision to keep the cost of the movie next to nothing and eliminate the need to pay a quality cinematographer.

This review is easy. The first-third, boring; second-third, boobs; last third, mildly entertaining. Act 1 consists of the three stereotypical loser kids spreading the word about their party. There’s Costa, the one who thinks he’s cool and wants to put on the party, Thomas, the birthday boy and unwilling party host, and B.J., the fat nerd. Act 2 is the party – All of the highlights were given away in the trailer, aside from the gratuitous nudity, i.e. the best parts. Act 3 is the party escalating into a blazing riot and the aftermath.

We’ve all seen this movie a million times before, but this is the first time I’ve seen it end with (spoiler alert) the unwilling host not only getting the girl, but also getting convicted of actual crimes and the instigator getting away scot-free. Not that it matters, but it left me confused by the immoral message that you can fuck over your friend and there won’t be any consequences as long as you can afford a good lawyer (and your friend for some reason can’t).

Go ahead and skip this one and watch the good parts on Mr. Skin. And for the record, I bought a ticket for Wanderlust and watched Project X instead. You’re welcome, Mr. Wain and Mr. Rudd.