‘Honesty Box’ is an application on Facebook that allows users to post messages anonymously to their Facebook friends. When you first join Honesty Box, you’ll see this message 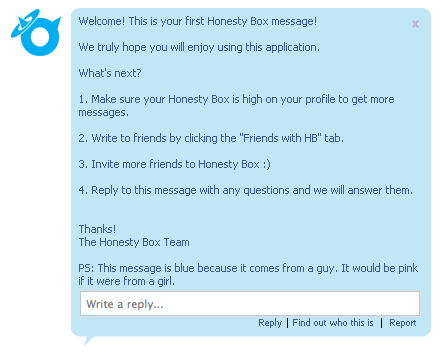 Most important to note from that message is the revelation that either Honesty Box was created by one man who refers to himself as the “Honesty Box Team,” or the Honesty Box application is actually a human male. For future reference when reading Honesty Box messages, here is the legend:

I think it was invented specifically for this kind of question:

Honesty Box is kind of like writing something on the bathroom wall at work, except only you and the person you’re writing to can see it, and if you pay enough “HB points,” you can see who wrote to you. It’s kind of like taking the gossip and drama that makes high school girls turn emo and cut themselves, and turning it into a game.

Drama on the Internet is slightly less interesting than drama in real life. But that shouldn’t stop you from harassing people! Here are some demonstrations.

Enigmatic and angry, all in one. It’s like I’m staring a gothic chick right in the face.

This one proves that we don’t need grammar, spelling, or even conventional diction to insult people!

Nonsense is fun, because nonsense means you can post anything you want and it will still work. You can post a status update that only one person would read:

Or you can take insults other people have made and play Madlibs with them.

I know at first glance it makes no sense, but bear with me. You see, a little while ago, there was a trend of scam websites, one of which being called IHateKaty, which offered pictures of a naked woman to people who linked other people to the website. The more people you link, the more pictures you get to see. It seems like a scam that wouldn’t work very well, given the embarrassment that comes with sending a link to your friends and saying “HEY CLICK THIS SO I CAN SEE NUDES.” But then came Honesty Box to save the day!

Even chicks wanted to get on this bandwagon.

And that’s the last time I used the Honesty Box. Maybe people should switch to just telling people face to face, in real life, how they actually feel about things.

Next week we will examine the relevance of Farmville.