Regardless of how die-hard of a video game fan you are, and despite the simple fact that these games are relatively simple, lack even the slightest modicum of blood, and are certainly meant for the entire family, it’s very hard to deny the appeal and joy behind the LEGO adventures.

It all began back in 1996 with Lego Island for the PC, but what really launched the storied franchise was when LEGO began using licensed characters from all over the place. Star Wars was first, and LEGO took the playability of the sets it already had in brick form and basically just turned it into a video game. The environments were endlessly surprising with hidden bits of power-ups and what not strewn throughout each level. Soon, the floodgates were blown open and new entertainment properties got their headliners set into LEGO: a sequel to Star Wars with a Clone Wars variation on the horizon, Indiana Jones and its sequel featuring different levels as well as an entire story based on The Kingdom of the Crystal Skull, Bat Man with its enormous rogues gallery, and the May 2nd release of Harry Potter based on the first four novels. Whew! This just goes to show how popular LEGO really is. Yet, there are some specific characters we’d really love to see get the LEGO treatment.

10
Back to the Future 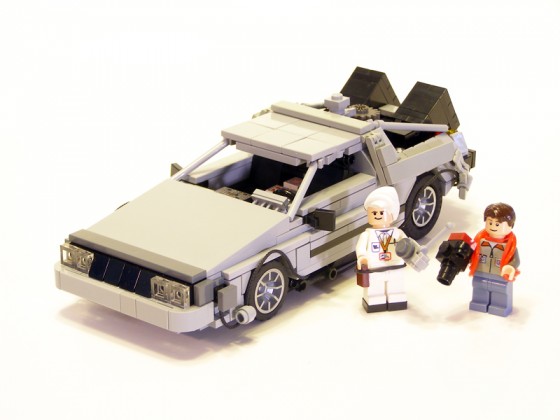 LEGO has already shown its penchant for basing its games on movie franchises with at least a trilogy under its belt, so why not Back to the Future? Can you imagine having to drive the DeLorean up to 88 miles per hour for the first part of the game so you could travel back to 1955? Then, of course once you landed there it would be trashed and you’d have to locate Dr. Brown and then the whole movie would play out. Logically you’d use Doc Brown’s lab as your base of operations. In the second story you’d not need roads, of course, but once you arrived in 2015, you’d have to use the McFly house but be able to hover-board all over the place and try to acquire the Almanac from Biff. By the third story, you’d have the flying train at your time-traveling disposal and be placed deep within the Wild West. How cool would this game be? 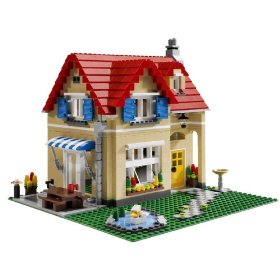 Why not? Each story would put Kevin in a new ‘home base’ including his own house, the Plaza Hotel, and the non-Kevin Alex version back again in his own house. The game would allow you to set traps, use common household LEGO-built items to thwart your enemies (Harry and Marv for the most part, though part 3 offered four baddies), and even assistants just like the current incarnations including the old Shovel guy from the original, the homeless Pigeon Lady from the sequel, and, well, I don’t know from the third since it isn’t the best of the movies I didn’t include the fourth at all since it is such a throw away movie that really, really sucks. 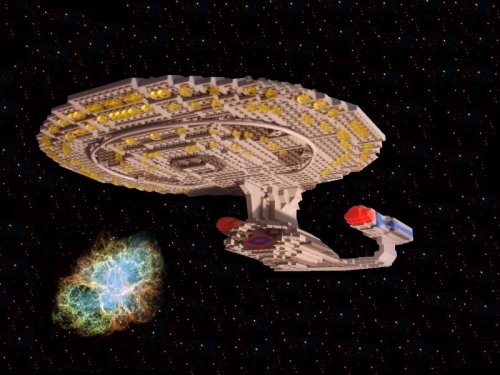 Since Trek has such a massive collection of both TV shows and films, why not release one game where each story is based on a specific genre of the whole? Part one could be Enterprise, then the Original Series, then The Next Generation, DS 9, and have the movies be un-lockable surprise levels! We all know, with the release of Trek On-Line, that it’s quickly going to become suer popular to be able to pilot an Enterprise and every other available ship in the Trek Universe. So now is certainly the time to cash in. The new Harry Potter LEGO boasts over 100 available characters to be able to play, can you imagine how many you could conceivable control in a Trek LEGO? 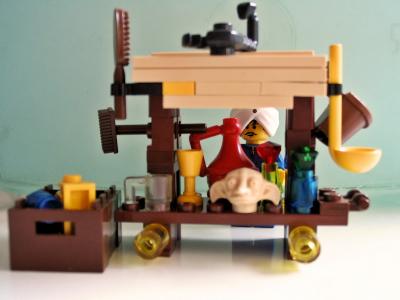 Yep, it’s a trilogy alright. It’s based in the desert city of Agrabah which opens it up to tons of fun stuff there. The Genie would be your partner during the entirety of the stories and he’d be there for specific spots where you’d need a wish granted or just Genie Power to achieve goals or acquire items unreachable by Aladdin. On some levels you’s need Abu to sneak into little areas like the Jawas or Short Round in the current LEGO games. You’d, of course, have a flying carpet in levels where you’d maybe throw pots at other Fakirs… the themes are virtually endless. 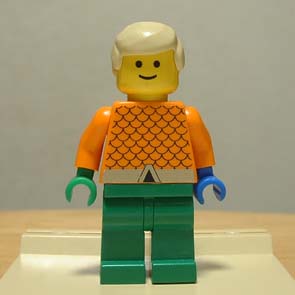 It wouldn’t surprise me a bit if this one’s already in the works, judging by the popularity of the current release. But, just as every classic hero sports, Batman’s list of enemies is never ending so there’s plenty of room for another slew of them for the sequel. In fact, why not base this game entirely on Cartoon Network’s The Brave and the Bold? Which, by the way, if you’re not watching and you are a Batman fan… shame on you. With the likes of Crazy Quilt, Kamandi, Black Canary, Aquaman, Blue Beetle, Mirror Master, Sorts Master, Clock King, Gentleman Ghost, and Gorilla Grod all at LEGO’s disposal, it would really make for an awesome continuation to the story. 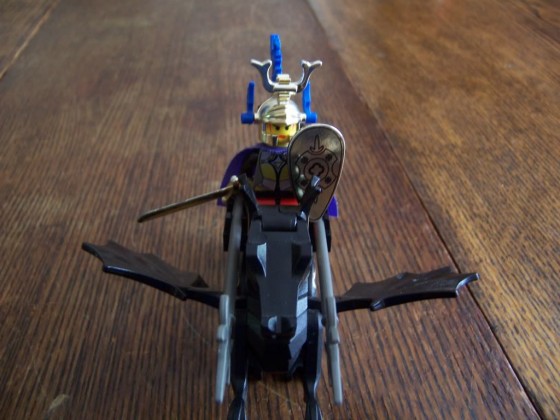 Dragon’s of Autumn Twilight, Dragons of Winter Night, and Dragons of Spring Dawning. Man, who wouldn’t want to take control of Tanis Half-Elven, Sturm Brightblade, Caramon Majere, Raistlin Majere, Flint Fireforge, and Tasslehoff Burrfoot! No one, that’s who! Everyone familiar with LEGO knows they can knock Castle-style systems out of the park and they’ve been creating them for years! Just to be able to wander through all three stories in Ansalon and fight off the Draconians… I get LEGO-y jitters just thinking of it. 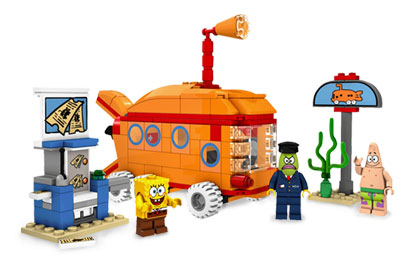 Speaking of licenses already turned into LEGO sets, why not everyone’s favorite spineless sea critter, Spongebob? Though there really isn’t specific stories like in the other games, Spongebob’s obvious base would be his Pineapple. Patrick would be the most obvious choice for a partner, but each area could use a specific buddy like Mr. Krabs, Gary, Pearl, Squidward, Sandy, Larry, or even Mrs. Puff. Of course there would have to be a section where he’d have to learn to drive and one for Jellyfishing. Maybe even a hidden game based on the movie where they fight their way beyond the outskirts of Bikini Bottom to rescue Neptune’s crown. 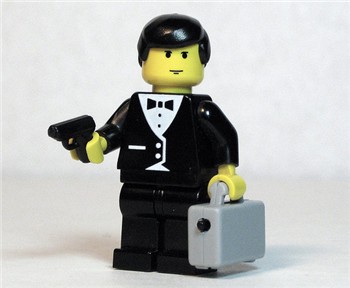 Could there be a more perfect film trilogy just begging for a turn as LEGO characters? Robert Rodriguez’s look at a family of spies who always manage to find themselves in rather sticky situations would be perfect as a LEGO game. For the first story you’d control Carmen and Juni Cortez as they set out to find their napped parents in Floop’s Island Castle. Then, in the second story, they fight on the island of Liki Liki with it’s ‘Dr. Moreau’, Romero. Finally, in ‘Game Over’, you do battle inside a video game controlled by the nefarious Sebastian the Toymaker! Awesome! Besides, this might be the only time in any form you’ll be able to play as Danny Trejo’s ‘Machete’! He’s the kid’s uncle, by the way. 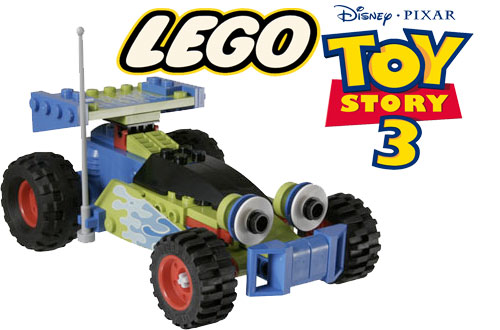 With the third incarnation of this blockbuster film franchise on the way this summer, now would be the perfect time to do a LEGO video game based entirely on every aspect of the series. You’d have to be Woody right away, that’s obvious. Your partners could be any toy from Andy’s room used to fit the situation. Of course, a once-over through the levels wouldn’t acquire you every piece of hidden booty, these would be saved for the ‘Free Play’ times when the whole level and every open character is at your disposal. The second story would lend you use of Buzz as you set out to find Woody through the city and the toy store! And who knows what could be available for the third story? No matter what, using any of Andy’s room toys and playthings would be awesome. 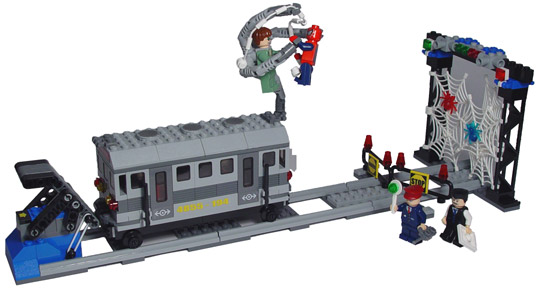 I have been waiting for this LEGO game for ever. Since LEGO proved it could really make a killer superhero game with its Batman license, there’s no reason to believe it couldn’t take the already-created Spider-Man LEGO toys and convert them to a video game. With a similar playability to Batman, with his targeting bullseye, Spidey could sling onto any flat surface and use various forms of his webbing as weapons. Heck, the lineup for Spidey’s bad guy barrage is just as expansive as Batman’s and equally as bizarre: Kraven, Venom, Vulture, Lizard, Doc Oc, Sand-Man, Green Goblin, Hobgoblin, Sauron… and buddies like Dare Devil, The Fantastic Four, and The Avengers, the character list is infinite. This is the LEGO game Traveler’s Tales needs to make next, hands down. But, any ideas are good ones so be sure to let me know any ones I might have forgotten.