Prostitution is not Recession Proof 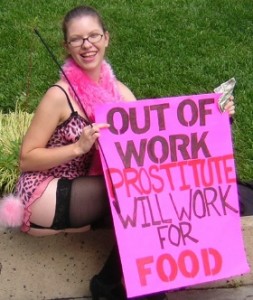 Is that a banana in your pocket, can I have it?

Well it turns out that the oldest profession has also been slammed by the current recession. In an article written by  The Ottawa Illinois Times, Dale R Charlier, learns the hard way that these are hard times for his hard-on. So without further ado I now give you Ottawa, Illinois’ finest:

An Ottawa man was apparently looking for cheap sex last month at a state park, according to police. Conservation Police arrested Dale R. Charlier, on a complaint of solicitation of a sex act. He posted bond at the police station at Starved Rock State Park.

Conservation Police said Charlier approached a woman at 3:22 p.m. Oct. 13 at Point Shelter, which is at the eastern edge of Starved Rock State Park, offering her $4 for a sex act. After investigating, police turned their information over to the state’s attorney’s office. That office filed the charge Thursday.

At the time of his arrest, police issued Charlier with notice he is barred from entering the park for 90 days. The charge is punishable by as long as six months in the county jail, as long as two years of probation and as much as a $500 fine. If found guilty, Charlier would have to register as a sex offender annually for at least 10 years. Charlier has two convictions for domestic battery and one for reckless conduct in La Salle County.

A few brain-busters are left for me after reading this article:

Either way Mr. Charlier thank you for your efforts, not for soliciting prostitution that’s gross. But for trying to low ball the market in such tough times. It takes a man with great big balls to go up to a woman and try to buy sex for less than a Big Mac. I salute you for paving the way for future creepy park dwellers to put their own price on whatever their heart or penis desires.