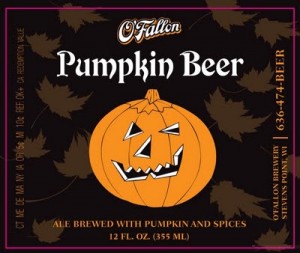 Information: (Site) “Like pumpkin pie in a bottle…we add 136 pounds of real pumpkin to the three-barley mash and then season the finished beer with cinnamon, nutmeg and cloves. Available September 1.”

Though the box itself has been emptied into the fridge (it’s a big box), and I’m able to see the remaining collection of the World Market ‘Winter’ collection 9-pack, I’m still impressed at the diversity and unfamiliarity of the remaining brews. The one I take a look at this time is the Pumpkin Beer from the O’Fallon Brewery. Though the label itself is quite simple and unadorned with too much artwork, it does have a pretty creepy looking winking Jack O’ Lantern, and that says Halloween to this reviewer.

The pour is an opaque light orange, quite reminiscent of the flesh from whence the beer get’s its ingredients and moniker. The first smell is a quite heady pumpkin aroma, proving that the “136 pounds of real pumpkin” used in the brewing process didn’t get buried behind other scents. You can find a little bit of the mentioned clove and, so help me, it does, honestly, smell like a pie sitting in an ice box. Not fresh baked, but then again, it’s not a warm beer.

Whoa! This is absolutely incredible! The first taste is -and I would firmly attest to this were I to be blindfolded- completely like having a nice slice of pumpkin pie in your mouth! Just amazing! Now, I suppose if you aren’t a big fan of pumpkin pie, well, then the chances are pretty good that you aren’t going to dig this beer. But, for those who long for the sweet stuff after a Thanksgiving Dinner and are beer lovers, well, here ya go. I am absolutely getting some more of this for just such an occasion. It even has the flavor or what the crust should taste like: buttery, wheaty, and rich with that bread-like flavor. Boy, and I thought it took a company like Jones Soda to really translate the flavor of a holiday into a bottle, but these brewers at O’Fallon have certainly done it justice. There should be no difficulty in deciding what to pair this with: pie. Well, maybe not wholly, since that’s a bit like pairing a red wine with a bowl of berries, so, why not with a turkey and cranberry sauce sandwich. Yeah, you know you eat those, too! Tasty beer.

Rating: * * * * *
Totally delicious, full of pumpkin flavor, and perfect for the fall holiday.