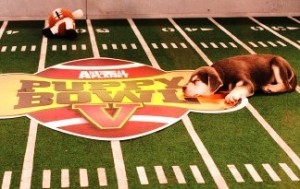 Yes, everyone is going to watch the Super Bowl, but I urge you to skip the pre-game hoopla and turn on Animal Planet for the annual Puppy Bowl. Our friends over at Pittsburgh Sports and Mini Ponies are actually going to do a Puppy Bowl Live Blog. Yep, you read that correctly. I guess they aren’t too concerned about the Steelers this year, and instead will focus on puppies.

The yearly canine competition is back as a new cast of pups takes the field for another year of dogged defense, puppy penalties and fido first downs. The action takes place on the grand gridiron of Animal Planet Stadium, where an all-star, all- “adoptable” lineup of rambunctious pups is ready to compete in the ultimate puppy showdown.

To kick start this year’s sports extravaganza is “Pepper the Parrot,” singing a unique rendition of the National Anthem. This year, every puppy featured in Puppy Bowl V is recruited from a local shelter, so these pooches are free agents looking for a good home. Plus, while the big guys are listening to “The Boss” at halftime, Puppy Bowl has once again enlisted the help of some frisky kittens for an all-new edition of the Kitty half-time show. Make your fantasy picks now and come online during the big game to vote for MVP (Most Valuable Puppy). Puppy Bowl V premieres Sunday, February 1, from 3-5 PM (ET/PT).

Here are some clips of previous Puppy Bowls: