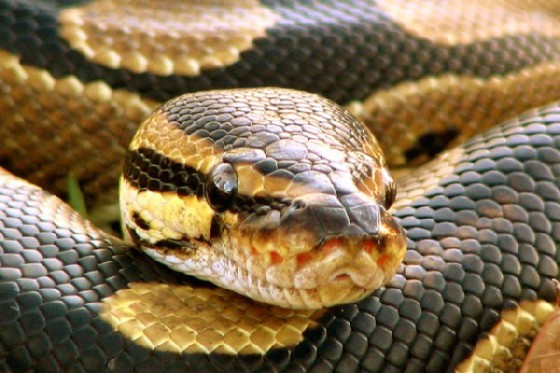 Any story involving a pet snake attacking and/or killing a stupid human makes me laugh. Believe it or not, some living creatures aren’t meant to be domesticated, no matter how docile they might appear. So, when a dumbass chick treats a four-foot python like her personal lap dog and ends up taking a bite to the face, I’m rooting for the python.

Police in Wisconsin said a woman who decided to take a python out of its terrarium during a book club meeting ended up with the serpent latched onto her face.

Coming soon to a multiplex near you, Snakes at a Book Club. Sorry, couldn’t resist.

The non-venomous snake bit into the woman’s right cheek and refused to disengage until the owner was able to remove it.

Boy, that snake was a real go-getter. I envision the other book club ladies pulling on it like a tug of war.

“It was sort of a happy ending,” [police spokesman Joel] DeSpain said. “The women ended up with no scars and no lasting emotional trauma.”

Really? I’m no shrink, but I’m thinking she might have a nightmare or two about the snake that tried to eat her face. Anyway, it sure as hell makes for a great anecdote for future book club meetings: “Hey, remember the time Barbara got mauled by the python? Good times, good times.”