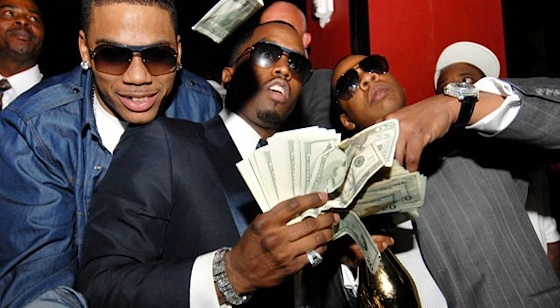 Rappers spend a lot of their time bragging about a lot of things. How much money they have, the women they’ve been inside and how many drugs they take. However, if you follow them on Twitter you’ll notice something else. They’re all nerds, seriously.

But first, just for fun, please enjoy this video of Fat Joe, Nelly, Bow Wow, The Game and Snoop Dogg playing video games. Because why not?

Also, before we get started, please enjoy this picture of self-proclaimed “Original Gangster” Ice-T posing with his giant Gears of War toy. This is the least nerdy rapper out there.

For our first example, Souja boy, loves video games. Amongst all the pictures of him taking drugs on Twitter, you’ll find gems like this. Yes, it’s him playing the shit out of the new Metal Gear game. But so what? That’s surely just Soulja Boy showing off his big-ass TV, right? It’s not like he’s got pages and pages on Instagram dedicated to his Bobblehead collection or anything. Oh … Look how fucking dog-eared that book is, that’s obviously something he reads a lot. It’s not like Souja Boy isn’t keen on flashing the cash, half of the other pictures he posts are him literally holding fat wads of cash. Yet the one item he owns that isn’t brand new is the one on video game careers.

But hey, we’re not even done, maybe you don’t like Souja Boy, maybe he isn’t OG enough for you. Well if that’s the case, go boot up a copy of Tekken Tag Tournament 2. Guess who’d you’d see.

That’s right, Snoop Fucking Dogg, who is, you guessed it, a massive fan of the game. If that wasn’t enough, Snoop is actually making his own game, in which you kick the shit out of people using rap powered kung fu. Hell, even Eminem, the quintessential angry man in rap is a huge nerd. How much? Well check out this tweet he sent out. If you’re wondering what the attached picture was, it was of Eminem’s high score at Donkey Kong. Which analysis showed makes Eminem one of the 20 best players in the world. We should point out that fellow rapper 50 cent claims he cheats at arcade games. Then again, we should also point out that 50 cent is another huge nerd, who also wants to turn Saints Row into a film. So yeah, he should know that no one ever cheats in video games, they just use superior tactics.

Getting back to Eminem though, it’s been reported that his personal studio is filled with vintage arcade games. But that’s not even the nerdiest part, not only do half of them have high scores personally set by Eminem himself, but he’s had super nerd Steve Wiebe (One of the best Donkey Kong players on Earth) autograph them. Yes, Eminem, a man with literally millions of fans got genuinely excited when a sweaty 40-year-old bearded man who plays video games for a living signed his Donkey Kong machine.