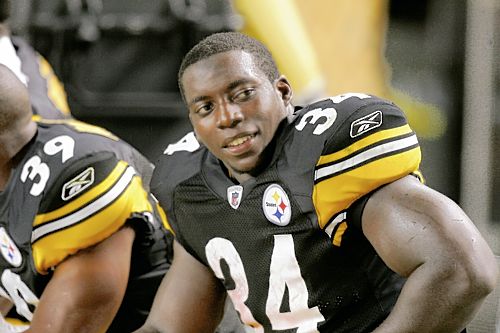 Rashard Mendenhall is a pretty good running back on the football field (unless he is choking away the Super Bowl with a fumble in the 4th quarter). Yet, the same level of intelligence he used to blow Pittsburgh’s comeback chance in the biggest game of the season, he used the other day on Twitter to discuss Osama Bin Laden.

What do you think the dumbest possible thing to do the day of Monday, May 2nd 2011 was? If you guessed show sympathy to and make it sound like you have Bin Laden’s back, you guessed right! I have heard the whole “you shouldn’t take joy in other people’s death no matter what argument” a few times but Mendenhall is on a different level here.

Mendenhall tweeted “What kind of person celebrates death? It’s amazing how people can HATE a man they have never even heard speak. We’ve only heard one side…”

I am pretty sure most of us have heard a Bin Laden speech or read his rhetoric at some point and there is a good reason nobody is interested in hearing his side of 9/11. What does Mendenhall think Bin Laden would be able to argue to any civilized, sane individual that would justify the actions over the course of his life, which ended with one of his wives being used as a human shield to protect himself?

Mendenhall also took his step into the world of conspiracy with this gem “We’ll never know what really happened. I just have a hard time believing a plane could take a skyscraper down demolition style.”

Perhaps Mendenhall can discuss his theories on what actually happened to the Twin Towers at the next Holocaust Denial Conference in Iran. I wonder if he thinks we actually landed on the Moon?

…and attempt to argue that he is some type of wise, philosophizing pacifist. Take a glance at the rest of his timeline and then get back to me. Keep in mind this is the same individual who believes the NFL and the slave trade parallel each other (another Tweet from him a few months back) but never took time time to truly construct an argument on why this was the case, claiming too many people weren’t educated enough to understand. I am still waiting for Mendenhall’s thesis explaining those parallels in detail. I do know a few key differences between Rashard Mendenhall and a slave is that Mendenhall gets off at the end of the day and actually gets paid millions of dollars for his services. Without getting into it, I am going to go ahead and say there are way more differences than similarities between Rashard Mendenhall and a slave, enough differences to make the NFL and slave trade not parallel at all.

Perhaps Mendenhall will apologize for his sympathetic Tweets on Bin Laden. Perhaps he will attempt to elaborate them further to better make his point. Either way, taking Bin Laden’s back isn’t a wise move in this country, or anywhere for that matter.