Ray Harryhausen: A Titan With Class 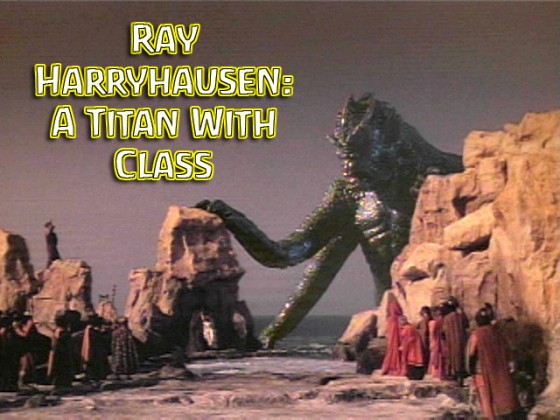 Clash of the Titans hit theaters this past weekend and from what I understand, the effects are only so-so. In fact, here’s what some other sources have to say:

“By making Medusa’s face beautiful & pale… she looks like bad, character-less CG. Sure, Ray Harryhausen’s Medusa moved about as quickly as Karloff’s MUMMY, but she LOOKED creepy. With one one-thousandth of the animation controls – Harryhausen’s MEDUSA was tragic, deadly and awesome far beyond the modern Medusa in Leterrier’s version.”

And then there’s this from Joe Morgenstern from the Wall Street Journal:

“A few more 3-D spectacles like “Clash of the Titans” and audiences will be clamoring for 2-D.”

Yeah, so, there goes any interest I had in this movie. Beyond even all of this, apparently the acting is quite contrived and vapidly wooden as well. Super. Well, I guess it just goes to show that remakes aren’t always what’s for dinner, especially if the original is, was, and for ever will be, a classic.

Which brings me right to my point. The effects wizardry behind the 1981 original were done by, as everyone ought to know, Ray Harryhausen. Rather that go on a complete tour of what this amazing genius gave to Hollywood, just check out his Wiki entry right HERE.

And here are 15 reasons remaking any more Harryhausen flicks will only result in heart break.

The Seventh Voyage of Sinbad

It Came From Beneath The Sea

Earth Vs. The Flying Saucers

The Three Worlds of Gulliver

Jason and the Argonauts

First Men in the Moon

The Valley of Gwangi

The Golden Voyage of Sinbad

Sinbad and the Eye of the Tiger