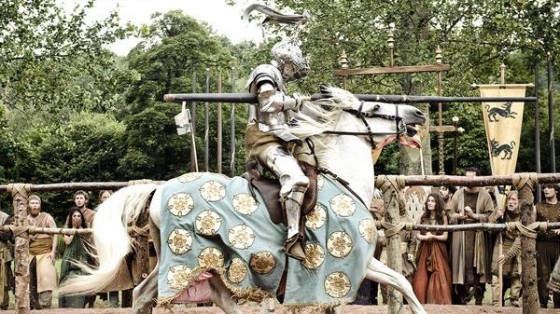 LARPers take note. The History Channel just greenlit a reality series about jousting called Full Metal Jousting. See what the crafty execs did there? It’s a play on Full Metal Jacket. Clever. Here’s a brief albeit dead-on description of the show.

“It’s sixteen guys and they’re gonna knock the crap out of each other,” vows the show’s executive producer.

What, no chicks allowed? Because if there’s a hot blond with DD boobies bouncing atop a frothing steed while aiming a giant wooden pole at some dude’s head, I’ll totally watch. Just sayin’, History Channel casting folks.

There are some media types crediting the success of HBO’s Game of Thrones as influencing the decision to give a thumbs up to a reality series about jousting. This might be true, however, I’d prefer to think the wild popularity of Medieval Times restaurants and the classic Atari video game “Joust” have more to do with what promises to be sixteen episodes of glorious goodness.