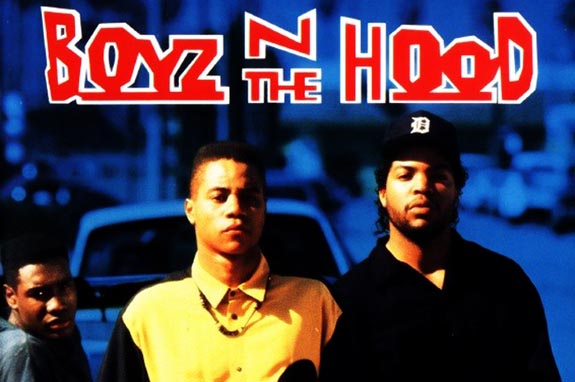 A good film is a good film. It shouldn’t matter what it’s about, and it shouldn’t matter who it’s about, so long as it’s well-written, well-directed, well-acted and has a jammin’ soundtrack. Non-Greek audiences ate up My Big Fat Greek Wedding, and it didn’t matter that they didn’t grow up in that environment. So, when looking at lists of the best black films, John Singleton’s 1991 drama Boyz N the Hood is one that I’ve noticed white people praise as well. To put that in perspective, Spike Lee’s Do the Right Thing is also on many ‘best black movie’ lists, but white people just don’t get it even if they say they do. Let me repeat: White people DO NOT GET Do the Right Thing.

So, though many people, particularly white ones, can’t personally relate to the setting in Boys N The Hood, here are some reasons why it’s well liked by them anyway, aside from it just being a well-made film (which of course is the prime reason).

Anyone who takes screenwriting classes and aspires to be a writer/director is envious of Singleton, who was only 23 years old when he was nominated for Best Director and Best Screenwriting for this film at the Oscars. Wide-eyed college students with screenplays dream of the day that their film gets made and it takes many years for the few who even make it. Singleton did it when he was barely out of college. Those with film-making aspirations should watch the director’s commentary.

2
Nods to Stand By Me

There are two scenes in this film that pay homage to the 1986 film Stand By Me. The first is when they are walking on the railroad tracks and then go to see a dead body. The second is when Doughboy is walking away at the end and disappears into thin air, ala River Phoenix. Singleton mentions this in the director’s commentary.

Considering the tension there was between police and residents in L.A. in the early 90s (which finally climaxed after the Rodney King beating verdict), Singleton could have easily cast a white man in this role. Instead this showed that stereotyping isn’t a white-on-black thing, but a black-on-black thing as well.

This young actor’s talent was apparent in this film and he went on to be an Oscar-winning star. Now, he’s that squeaky-clean actor that everyone likes.

5
It Does the Right Thing

Unlike Mookie in Spike Lee’s Do the Right Thing, Tre actually does the right thing. And say what you want about the film’s ultimate message about ‘the man,’ no one is asking for handouts in this film. Furious preaches hard work and responsibility. Does Mookie do that? No. So F-you, Spike.