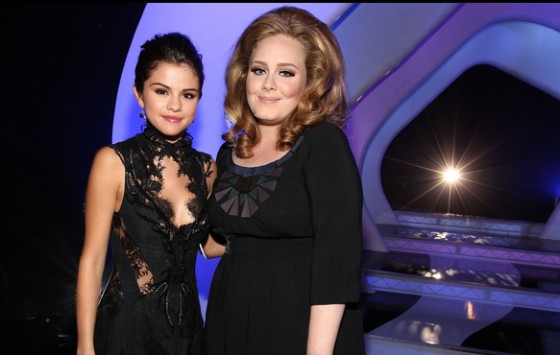 Moments later, Selena was being digested in Adele's massive stomach.

I haven’t watched MTV’s Video Music Awards in, I’m guessing, seven years. Hell, I don’t think I’ve watched MTV in at least a year. Honestly, I can only take so many shows about aging Real World castmembers wrestling one another for cash, fat teenage girls starving themselves to fit into a prom dress that will make them look fatter and stargazing parents pimping out their ten-year-old daughters at “Little Miss” competitions. At some point even a cynical bastard like myself has to hit the Off button and take a cold shower to wash away the pop culture grime.

Therefore I was flummoxed to learn this past Sunday’s VMAs broadcast received the highest ratings to date. Roughly twelve million idiots, er, people tuned in to see Lady Gaga dressed as a man and Selena Gomez be eaten alive by Adele. I’m told it was just like the last five VMAs, except no one was killed backstage by a gun-toting rapper. Bummer.

At any rate, the network that doesn’t air music videos anymore is still capable of duping audiences into believing they do. Congratulations, MTV. Your contributions to the downfall of society have not gone unnoticed.