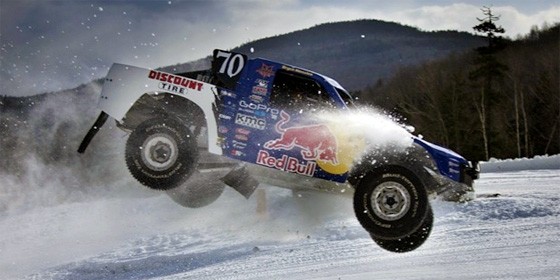 Red Bull must be an amazing company to work with. Imagine the craziest extreme sports idea you can think of to pitch to them, and they’re likely to say yes and add it to their Signature Series. The Red Bull Signature Series is a collection of the most progressive action sports events in the world, featuring some of Red Bull’s top properties including Frozen Rush, Double Pipe, Joyride, Rampage and Straight Rhythm. They are some of the most innovative snowboarding, mountain biking, off-road trucking, freestyle motocross, skiing, surfing and BMX events in the world today, contested on custom courses from the inspiration of the athletes themselves. 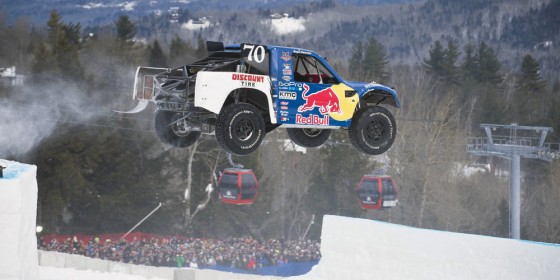 Next up on the Red Bull Signature Series calendar is Frozen Rush held at Sunday River Ski Resort a week from now. It’s the world’s only off-road truck race in the snow, featuring 900-horsepower off-road Pro 4 trucks racing head-to-head over jumps, around gates and down ski slopes. That’s a recipe of about 50% amazing, and 50% insane, which is why we’re so excited to be checking it out live in Maine next week. Take a peek at the action from last year to see what we’re so pumped about, and then imagine doing a ride-along with one of these guys :

Yes, they actually did that, and are set to do it again on January 8th and 9th. The action-packed competition will air on NBC as part of the year-long Red Bull Signature Series. We’ll be there covering Frozen Rush via social media, so be sure to keep up with the #FrozenRush hashtag. The entire event will be also available to watch LIVE, January 9th exclusively on Red Bull TV beginning at 12:30pm ET. Check out the animation below for the amazing course that they’ll be racing on this year :