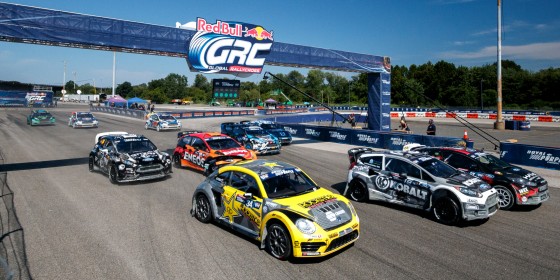 Red Bull Global Rallycross (GRC) returned to the Nation’s Capital this past weekend for an exciting day of racing outside of RFK stadium. Red Bull GRC is a U.S. based rallycross series that began in 2009 featuring heavily modified production vehicles called Rallycross SuperCars that are run at a wide range of venues from speedways to street courses that commonly feature a mix of dirt and asphalt. 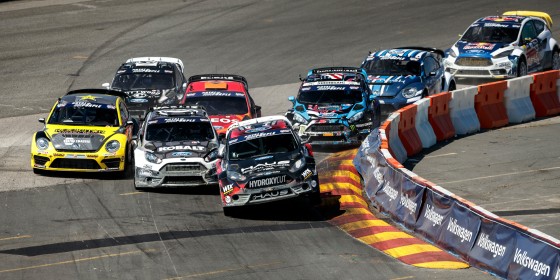 At just under 1 mile in length with nine turns, the Washington track was significantly larger, faster, and wider than last year’s course and one of the longest in Red Bull GRC history. While it was mostly a paved course, the track also featured a dirt jump which looked awesome on both television and photographs. Check out this collection of action shots provided by Red Bull for a taste of the sweet racing action :

The twelve car field at this weekend’s race featured nine Fords in total (eight of which were Fiesta ST), two Volkswagen Beetles, and one sad-looking Chevrolet Sonic. For some reason the pair of Subaru WRX STIs were not entered into this race, which made the field even more Ford heavy than normal. Event presenting sponsor Volkswagen’s American headquarters are located nearby in Herndon, Virginia so they had a heavy presence at the track this weekend. Unfortunately for them, Ford dominated the podium taking the top four places. Nelson Piquet Jr. earned the first victory of his Red Bull GRC career, turning the tables after finishing runner-up to Patrik Sandell in last year’s inaugural race in DC. 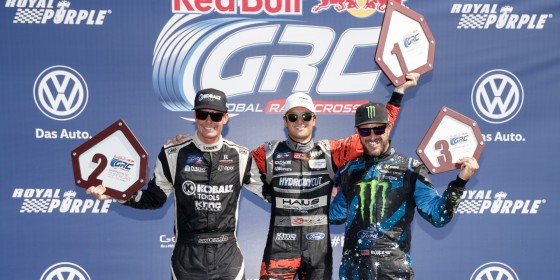 Gunaxin is also located nearby, but sadly we had a previous commitment on race day and had to watch the action on NBC like most people. We did however make it down to RFK on Friday for practice and qualifying, to check out the track and the paddock. While race day is certainly when you’ll find the most action, it’s also when you’re likely to encounter the biggest crowds. We highly recommend also checking out practice and qualifying days at any race you might attend, as it’s easier to get closer to the drivers, cars, and track. It’s also when you’ll see the most work being done on the cars, to get them ready to race. We captured a photo of each of the Rallycross SuperCars in the Paddock, with their crew hard at work preparing the car for qualifying, and have arranged them in the order of their race finish below :

The next chance to catch Red Bull GRC is September 12-13th in Los Angeles, and the season ends in Las Vegas during SEMA in early November. Hopefully we’ll make it out to the Vegas race this year to see who takes home the championship.