THQ has just released another game in the Red Faction line called Armageddon. Yea I know you might be sick of the any word dealing with the end of the world like “rapture” or “Armageddon”, but this game makes up for all of that. The game takes place on Mars in the year 2170, fifty years after the events of Red Faction: Guerilla. After the liberation of Mars, the surface of the planet has become uninhabitable. The reason was that the massive Terraformer machine on Mars which supplied it with its Earth type atmosphere was destroyed following the strike of a huge meteor, causing super-tornadoes and violent lightning storms to engulf the planet.  The Colonists survive by going underground in the mines of Mars built by their ancestors, creating a network of caves under the surface of the planet and setting up colonies there.

Then you find out  that a  long-dormant evil emerges from the caves of Mars, unleashing Armageddon on the planet’s colonists, with this force stopping at nothing to cleanse the planet of life. This is where mankind finds itself on the brink of extinction. Red Faction: Armageddon has all new groundbreaking challenges. Oh and by the way you are humanity’s last hope for survival. Thanks to THQ for letting me test out the game ,which came out today for the 360, PS3 and PC.

In the game you play as Darius Mason, grandson of Martian Revolution heroes Alec Mason and Samanya. You run a lucrative business from Bastion, underground hub of Colonist activity.  In the game Darius is tricked into reopening a mysterious shaft in an old Marauder temple, he releases a long-dormant evil and unleashes Armageddon on Mars. As Colonist and Marauder settlements are torn asunder, only Darius and the Red Faction can save mankind. The game plays as a third-person shooter with a variety of weapons at your fingertips. As the game progresses you find more kick ass weapons. This is a good thing because the more you dig into Mars the villains get nastier. 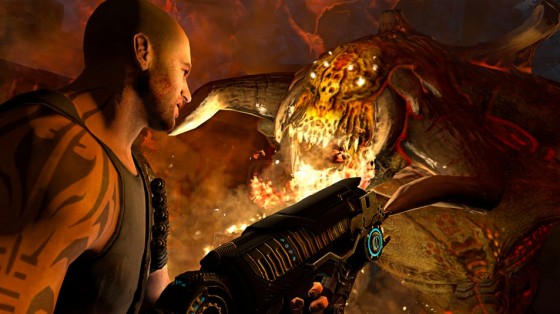 To aid you on your journey is S.A.M., which is a computer that helps you navigate through Mars so you can stay focused on your mission. The game play is sick as well as the graphics. You can have four weapons at a time which is great since you will be coming across many different enemies. I was particularly fond of Nano Forge, which allows you to create a force field or a force blast, and you can also repair damage to stairs and buildings. 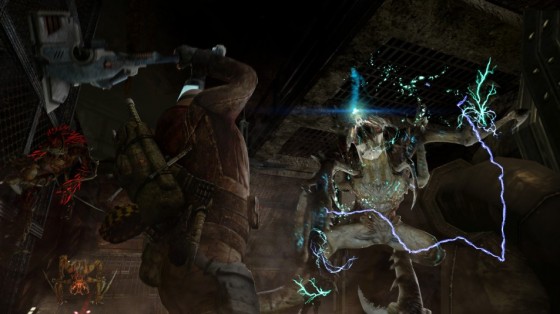 There is a multiplayer mode in the game along with two forms of gameplay. There is the Infestation mode that allows up to 4 players to cooperate and battle the alien forces. In this mode each player has access to only one Nano Forge ability so that players can combine their abilities for devastating effects. The other mode called Ruin mode is all about mayhem. The purpose in this mode is to destroy as much of the environment as you can in the shortest amount of time.

Whether you are playing in with friends or just trying to save mankind by yourself Red Faction:Armageddon is a great game and is worth the hype around it. For more info check out the game’s website as well as links to purchase the game. Below is the trailer :