The Washington Redskins welcomed 100 men and women of our Military to training camp for Wednesday afternoon’s practice. The event was coordinated by the team and USAA, who hosted soldiers from Fort Lee, Naval Station Norfolk and Langley Air Force base at the Bon Secours Training Center in Richmond. The military were given the VIP treatment, which included a visit from Ken Harvey during lunch, and an epic autograph line after practice. 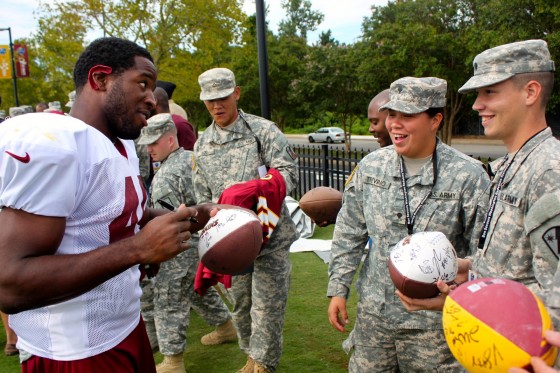 Beyond being one of the biggest stars in the league, Robert Griffin III is a well-known military brat, and the son of two Army Sergeants. His respect for the military is well documented, and as soon as he saw the troops lined up along the sideline, he ran straight to them to shake hands before practice. This was his much-anticipated first day of 11-on-11 drills after surgery, yet his focus immediately turned to the Military when he spotted them. Check out this video from USAA for more about Robert’s background and his salute to the military:

RGIII is definitely the field general of the Washington Redskins, but on Wednesday he had the opportunity to meet a real-life 4-star General, Larry O. Spencer of the Air Force. Spencer is currently the Vice Chief of Staff of the United States Air Force, is a Washington, DC native, and one of the most senior African-Americans serving on active duty in the United States Department of Defense. 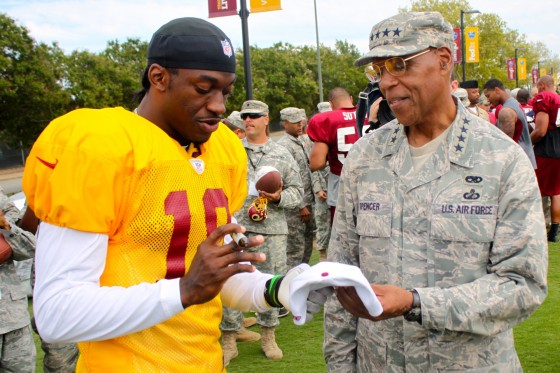 The military is the most disciplined group of autograph seekers you’ll ever see, but there was definite joy on the faces of these young men and women. We were on hand to capture the festivities, and for that privilege we felt obligated to share this extended photo gallery. If you are pictured in any of the photos, first thank you for your service, but also feel free to use these images however it pleases you. We’re sure you’ll want to share some photographic proof on your personal Facebook walls of the day you met RGIII, and we’d be honored if you used our photos. Other outlets are welcome to use the photos as well, however we do request a simple link back.