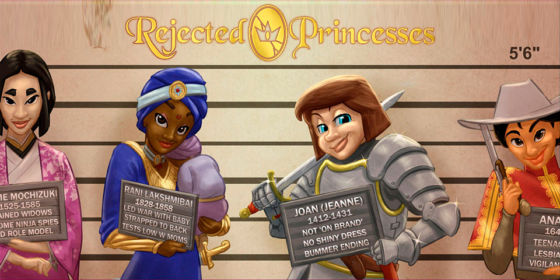 Rejected Princesses was originally a website project (but now also a book) by Jason Porath, a former effects animator at DreamWorks Animation.

I’d often joke around with co-workers about movies, and one conversation we had was about “what is the least likely woman to ever get the animated princess treatment?”

Thus Rejected Princesses was born, to celebrate ladies who are too awesome, awful, or offbeat for kids’ movies. Part art project, part standup routine, part book report, Porath’s site imagines what if we made animated musicals about the women of history and myth who refused to behave. Each week Porath highlighted a Rejected Princess with an illustration and a blog post about her exploits. We’ve hardly heard of any of his selections before, and that is exactly the point. Below is a collection of some of our favorites from his series, but be sure to check out Rejected Princesses for much more about these fabulous women :