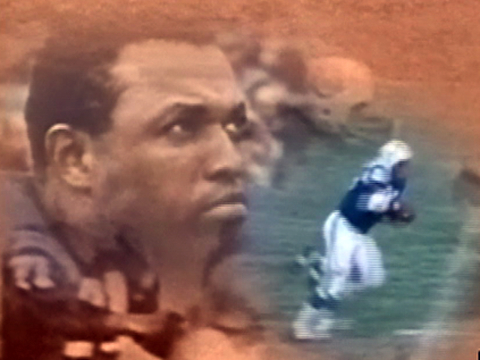 In the annals of NFL history, there have been many great athletes to play the position of tight end. However, the true revolutionary of the position was drafted all the way back in 1963 in the second round by the Baltimore Colts. His name was John Mackey.

Mackey who played for four years at the University of Syracuse was an athlete in which the NFL had never seen. Back then, tight-ends were supposed help block the running game and occasionally catch a pass or two. Mackey was the start of the changing of the guard for the position; he was quick and helped stretch the field to make the offense’s job an easier task at hand.

In his first three seasons with the Colts, Mackey complied ninety-seven catches in which sixteen of those ultimately went for touchdown. In his fourth season with the Colts, Mackey had his best overall year, catching fifty passes for 829 yards along with nine touchdowns. Sure it helped that he had hall-of-famer Johnny Unitas throwing him the passes but Mackey would have been a star no matter where he played the game of football.

The culmination of Mackey’s career occurred in Super Bowl V against the Dallas Cowboys. Although the game is best known as the “Blunder Bowl” due to the amount of turnovers, Mackey made a play that helped the Colts to an eventual win. As Baltimore trailed 6-0 in the second quarter, Johnny Unitas went back to pass looking for wide receiver Eddie Hinton and as the pass was deflected by Cowboy’s defensive back, Mel Renfro it landed in the hands of Mackey who ran it eighty-yards for a touchdown to tie the score at 6. The Colts would go onto win by a field goal from Jim O’Brien and Mackey claimed his only Super Bowl ring.

After his career in the NFL ended, Mackey became the head of the NFL Players Association and helped keep the group together during uncertain years. He also fought to give retiring players pension and health benefits, which impacted his life going into the future. Mackey was named to the NFL Hall of Fame in 1992 as the second tight end ever enshrined.

Nearing the 2000’s, Mackey was diagnosed with frontotemporal dementia, which caused him to lose his memories of playing in the NFL, and caused him to question the ability of others. He eventually lost that battle earlier this week at the age of 69.

In the end, Mackey helped revolutionize the tight-end position in the NFL but also helped many other players get a chance to play in the league. He was an inspiration on and off the playing field and his legacy will continue to live on in NFL lore.