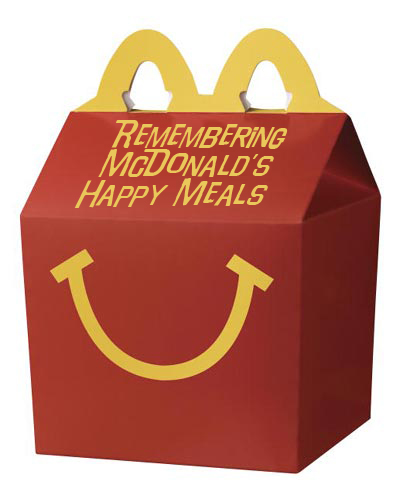 Is it just me, or have the once exciting and special Happy Meal toys become something more of a sad joke of late. I have three kids who love when we happen upon a Mickey Dees for the occasional lunch and, of course, they want to have the toy of the month. However, unlike the joyous approval of said trinkets from my own youth, the recent batch of toys from the past few years always seem to end up buried under mulch in the backyard. They just don’t hold that same level of innocent fascination as they once did, and I’d have to blame the choices of movie tie-ins McDonald’s has chosen recently. Oh well, whatever the case, today we’re going to take a look at a few of the better boxed freebies from past and some recent Happy Meals.

Often, when their isn’t a movie to plug or some new popular entertainment flavor of the month to promote, McD’s will take it upon themselves to create a Happy Meal toy really worth checking out.

One of the most remembered and popular McDonald’s ‘toys’ wasn’t really a toy at all, but the bucket in which your meal arrived. Said buckets were available for many years around Halloween since each was to be used as a Trick Or Treating candy collection vessel. Of course I speak of the Ghost, Jack O’ Lantern, and Witch pails. I actually still have a ghost one somewhere in our storage disaster filled with rubber eyeballs. Oh, and while you’re reminiscing, check out this website for the entire series! 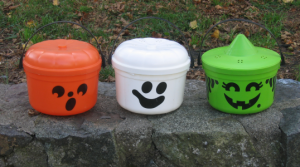 Another of the more popular and famous Company Sponsored toys was the McNugget Buddies series. Back when the little chicken fritters were really coming into their own, McDonald’s released a large set of little McNugget people complete with interchangeable clothes and little accessories. This theme carried over into various holidays as well and even when filler toys were needed down the line. And as it seems, the same site that loves the buckets loves the buddies!

Finally, the last of the really cool McDonald’s exclusives comes as something of a bizarre little amalgam of sorts. It would outwardly appear difficult to somehow incorporate Transformers into a restaurant theme when you are, well, a restaurant. Well, be that as it may, McD’s did it, and did it really well with its line of transforming food. They were called ‘Changeables’ and you basically got one of every type of menu item that could turn into a ‘robot’. My personal favorite was the ice cream cone girl robot. Classy. 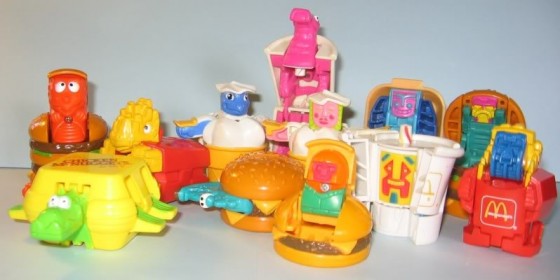 For a fast food joint primarily geared toward kids, it’s hard to go wrong when incorporating Superheroes into children’s meal packs. Mcdonald’s, if nothing else, is pretty smart that way and for a lot of years they’ve geeked out big time and stuffed their Happy Meals with Marvel and DC characters for both movie, TV, and video game tie-ins. Check it out.

One of the first waves was the Marvel Superheroes line and the Spider-Man Animated Series from FOX that both hit Mickey Dees somewhere in the mid-to-late 90’s. The former features such famous faces as Wolverine, Hulk, Invisible Woman, and Storm, whereas the latter focused on characters from Spidey’s toon: Doc Oc, Scorpion, Venom and such. What was especially queer about both sets was the need to put many of the heroes in some type of vehicle. Makes no sense. Anyway, here they are including the newest Spectacular Spider-Man ad as well. 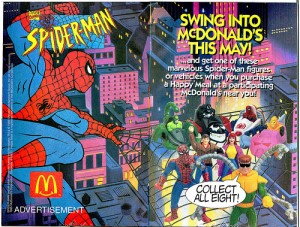 Now DC has had its fair share of McDonald’s Happy Meal toys, too. Of course you have the classic Superman and Batman toys that hit both directly promoting their respective cartoons: 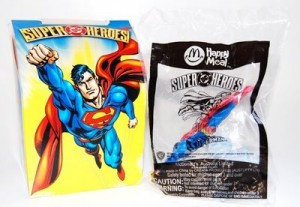 And then you have the Superboy and the Legion of Superheroes 8-Character set that came out a few years ago featuring Superboy, Brainiac, Bouncing Boy, Timber Wolf, and Lightning Lad among others:

Finally, we have my very favorite recent comic Video Game tie-in of all time: Batman LEGO. Though the toys weren’t anything super spectacular (that is to say they weren’t actual LEGO, much like past sets that actually were) they were still cool and each offered an exclusive code you could use in the game itself. Awesome. 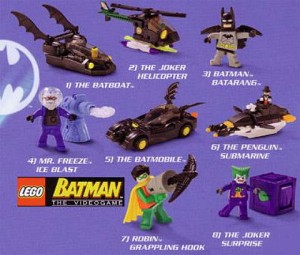 Look, I’m not about to go into this whole debacle any more than to just say this: McDonald’s offered Teeny Beanie Baby sets a few times over the course of their inexplicable rise to popularity, and they -needless to say- sold like proverbial hotcakes. Here’s a few pictures and video. I need to go wash my hands. 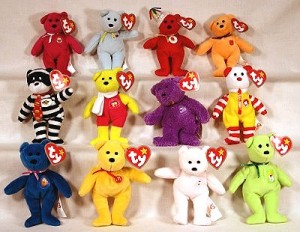 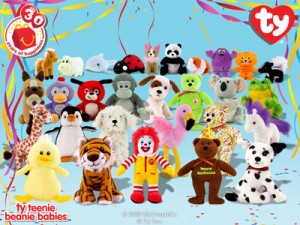 Sadly, the long-time partnership between McDonald’s and Disney has faded over the past few years, and thus the Fast Food giant has been able to sponsor other animation corporations such as Dreamworks (Shrek) and such. But, back in the day, you could always count on any new Disney film (Jungle Book, Cars, Mulan, Little Mermaid, Hercules) getting the Happy Meal treatment.

The most auspicious Disney set from the past fifteen years has to be the 101 Dalmatians toys where there was, literally, One-Hundred and One different puppies. Even now collectors are clamoring to find the remaining pieces to incomplete sets. Should I tell people I have 3 sets in my basement? Nah… 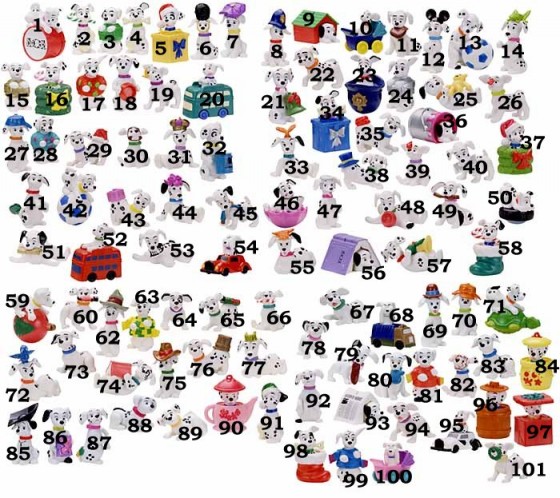 Almost just as insane was McDonald’s and Disney’s ‘100 Years of Magic’ featuring 100 different Disney characters from various TV shows and movies. Again, this is a collectors nirvana and it’s becoming more and more difficult to acquire complete sets. 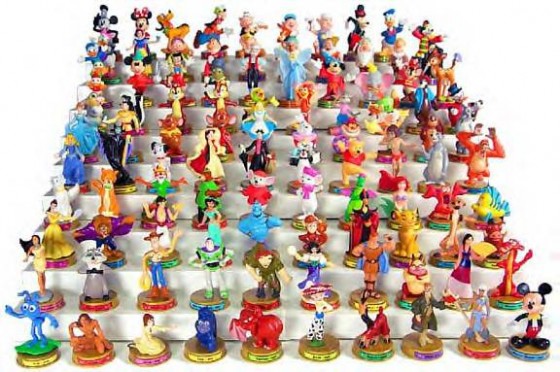 Quite possibly the greatest pairing of a Fast Food Joint and a Movie License of all time. McDonald’s has handled its release of Star Wars toys awesomely and each and every time the toys are very cool and definitely a collector’s dream. For this number one spot, rather than do a write-up of every toy and exclusive, I’ll just drop in a couple of the toys over the years and follow up with a few videos. May the Force… 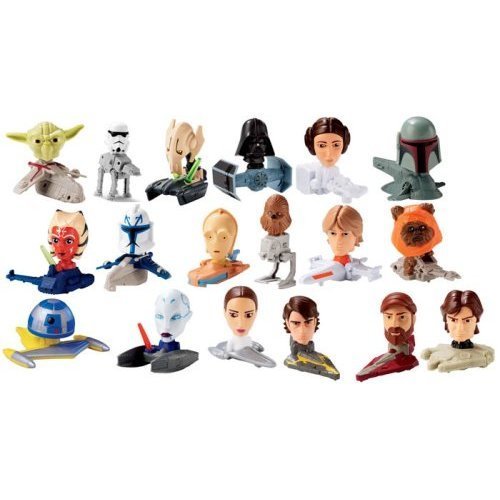 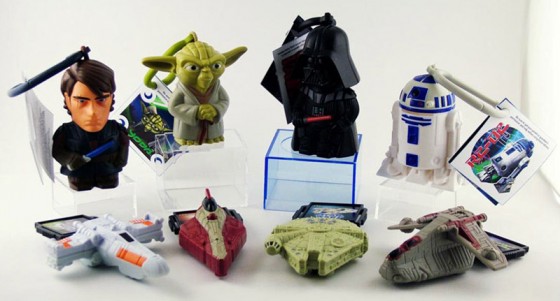