Remembering Seinfeld’s Kramer as a Turkey 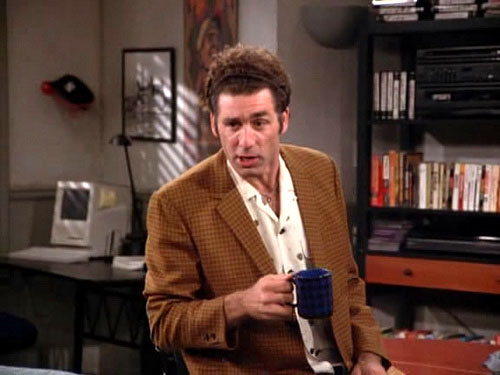 It’s hard to fathom, but Seinfeld has been off the air for fifthteen years. Fifthteen frickin’ years! Sitcoms just aren’t the same without the madcap antics of Jerry, George, Elaine and Kramer. I’ve seen every episode at least six times and still laugh at all the gags even though I could recite the dialog verbatim. I know, I know, gushing about the show is passé, but I just can’t help myself.

Since it’s Thanksgiving, it seems an appropriate occasion to relive one of my favorite moments from the series having to do with turkey. Of course, I’m referring to the episode titled “The Butter Shave.” Kramer’s decision to cover his entire body with butter goes horribly awry when he falls asleep in the sun and transforms himself into a deep-fried delicacy, much to the delight of his portly pal Newman.

I love how he waves with his little wing. Hilarious. Happy Turkey Day, folks.