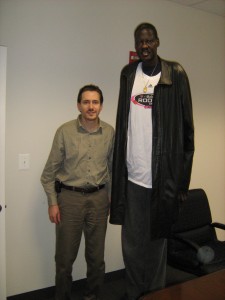 Former NBA player Manute Bol, 47, died Saturday. He was a friend to Gunaxin and an all-round great humanitarian and person. At 7’7, Manute was tied for being the tallest player ever in the NBA. The Sudan native spent much of his life trying to help the people of Sudan.

When I met him in early 2009, he was not in good shape. I asked if I could have my photo taken with him before I realized that we would have to help him out of his seat. But he complied (unlike Gary Coleman, who ignored me when I met him). Manute died of acute kidney failure and a skin disease.