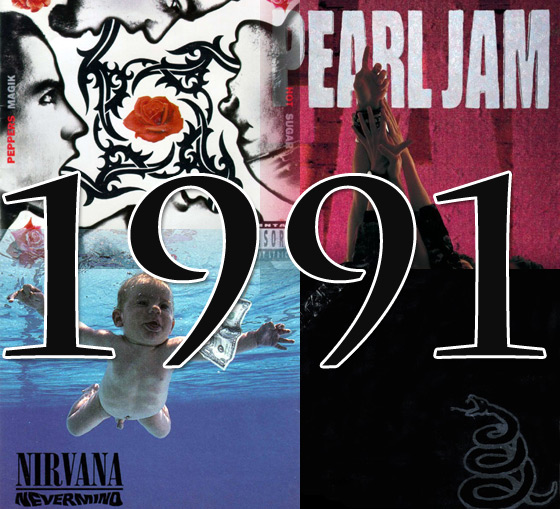 Twenty years ago, early in the year, Vanilla Ice’s utterly awful album, To the Extreme, was the number one selling album in the United States. Then people discovered the lasting star Mariah Carey, while also embracing ho-hum acts such as Michael Bolton’s Time, Love & Tenderness.

But 1991 also marked the release of some of the most important and influential rock albums of the last two decades. While the eagerly awaited Guns N’ Roses Use Your Illusion II didn’t disappoint and served as a perfect soundtrack to Terminator II: Judgment Day, it was Nirvana’s Nevermind and Pearl Jam’s Ten that brought the Seattle scene – grunge – to the forefront of rock music genres and put the final nail in the coffin for ‘80s glam metal.

However, 1991 didn’t just give us grunge. Metallica broke into the mainstream with its release of the self-titled Black album and the Red Hot Chilli Peppers’ release of Blood Sugar Sex Magik brought funk into the ’90s. These four albums, along with others like Soundgarden’s Badmotorfinger and Alice in Chains’ Facelift, took off that year, setting the tone for the rest of the decade. Even now, 20 years later, this music continues to get radio airplay, and stations aren’t likely to let up any time soon.

Let’s take a look at these four albums, and not wonder how our lives and taste in music would be different had they not been released.