Returning to The Blair Witch 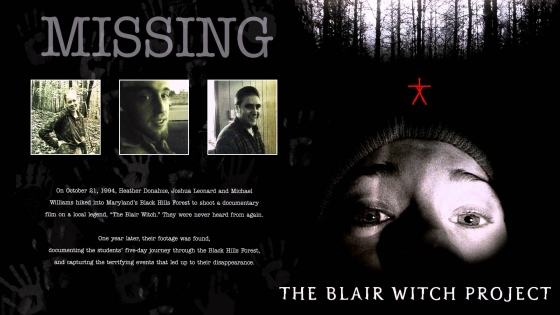 1999 wasn’t that long ago. Seventeen years feels like it was yesterday. Well, maybe to some of us. Returning to theaters this Friday, September 16th, will be the third film, yet what is being billed as the direct sequel to the original Blair Witch Project that was released back in ’99. Being horror fiends as we are, we really dug the classic and, to be honest, fell for the surrounding bullshit of its phony lore hook, line, and sinker. We will touch on that only because it will bring us directly to the new film and how and why it became the new Blair Witch.

In 1999 we all remember seeing the ads on TV about a new movie coming out featuring what then was a new thing called ‘Found Footage’. Sure, some ’70s and ’80s horror flicks touched on the style, most notably ‘Cannibal Holocaust’, but this movie, The Blair Witch Project, was pumping it up as something new and different. And just then, for many of us, this seemed very intriguing and rather scary to boot. Supposedly, these kids went into these woods in Maryland and basically got lost or died and all that was left was video tape showing their hunt for something called The Blair Witch! We told everyone who would listen, including someone who just so happened to be from Maryland and he nodded his head telling us it was all too true. What? We inquired, not believing. Yeah, all true. We fell for it. And then we saw the movie and fell in love.

Anyway, it went on to break records left and right and became something of a phenomenon. It scared, kept you on the edge of your seat, actually made you feel something for the leads (who did, in fact, turn out to be actors), and put quite a fright into the ending sequence. Eventually, the dipshit brains in Hollywood decided to make a sequel called Book of Shadows, and it was a new and very specific kind of terrible.

So all of this brings us to now, and a new, far better and far scarier sequel called simply, Blair Witch. Apparently, the brother of Heather from the first one is setting out to discover the truth about the disappearances. Sadly, since we all know it’s not a real thing now, it just doesn’t carry with it that piece of effectiveness.

When it was screened back in July it was known as ‘The Woods’ (so titled as not to then gain the ire of critics bent on nipping at a sequel) and something about it then really clicked with us horror heads, that is until it was decided to be rededicated as the Blair Witch sequel. Well, let’s just say we’re all hoping for far better and scarier, but many critics already have their doubts, saying that it’s simply a rehash of the far superior original.

Look, we here at Gunaxin will freely admit that the ads seem promising, but we also have our doubts. Sequels, no matter how well they’re pumped up and promoted, rarely do the original justice. So, here’s hoping. One of our writers has already seen it however, and we’ll have his thoughts in our full review of Blair Witch coming later today.