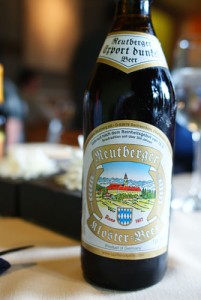 Info: “The Reutberger Brewery nun’s Patron Saint is Saint Joseph and to commemorate his sainthood they brew this seasonal Bock in his honor. The beautiful light-red color is a product of the precise blending of 50% light and 50% dark malts. It takes 3-5 months of lagering to produce this perfect beer. Slightly sweet with a touch of bitterness.”

It’s rare that I get into such ‘foreign’ brews. In fact, I’d likely not have purchased this bottle on my own, and maybe that’s just because I’d never seen it before. Lucky for me, in this case, it happens to be my Birthday (July 27th) and my buddy knows my love for different beers almost as much as you, the readers, do. So, in his infinite wisdom, he picked me up a variety of beers and this one I hold in my hand that you now read about is but one.

The pour is just stunning: as deep red as my own birth stone (ruby) and equally as beautiful. The head is foamy and creamy and sits just perfectly on the beer with its stark contrast in colors. But the smell: unbelievable. It’s ripe with malts, a slight bitter nose, and crisp hoppiness to round it all out. There’s a sweetness there as well, and after a few good wafts, it wakes and blends very well with the other scents. Just awesome.

I am just about floored by the flavor: Astoundingly malty, crisp and sweet with a hidden discovery of some kind of fruit rind or even a berry… it is a bit hard to discern, and that is all part of this beer’s mystery. It’s a slight bit on syrupy, with an almost waffle-type mouth feel paired its maltiness coupled with the masking sweetness; it’s just something all together new and different for me. There’s something so satisfying about finding a beer that you’ve never had and not being the least bit disappointed. This is such a German beer with its heavier lager style and its inherent sweetness that much of our American brews have yet to discover. It’s not that it’s a weighty beer by any means, but it has that well-known German punch that certainly makes for a stronger brew. It is, by far, one of the better choices I’ve had of late and I would certainly suggest pairing this with lamb, a good veal, or anything using an Au Jus. Amazing. Seek this beer out at all costs.

Rating: * * * * *
A wonderfully ruby beer with an astonishing malty-sweetness. This is a sipper, for sure.