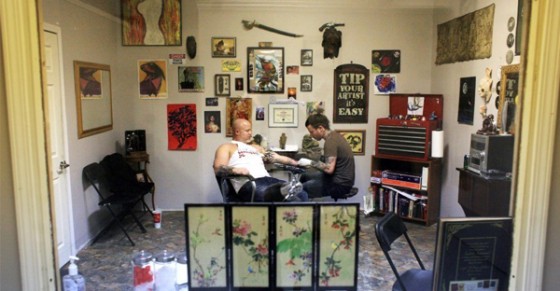 In an effort to attract a new demographic to his service, a Michigan pastor has opened a tattoo parlor inside his church. How come no one thought of this ages ago? Now you can pray in the house of the Lord while getting a badass crucifix inked on your back.

Rev. Steve Bentley of The Bridge, a church located inside a Flint Township shopping center, said his ministry is built on the belief that mainstream religion has become ineffective and irrelevant to most people. To that end, he opened Serenity Tattoo.

Bentley, who has two tattoos, said he understands some don’t like the idea of Serenity Tattoo inside the church, but the pastor considers tattooing a “morally neutral” practice that he likens to getting one’s ears pierced.

“We are about doing church in a different way and being relevant to people,” Bentley told The Flint Journal. “You can get a tattoo in a clean environment. You can do it while still sticking to your moral code.”

And just in case you contract Hepatitis C, you can start praying for a cure on the spot.