WARNING: There are spoilers for Paranormal Activity 3 in this post. Now you can’t yell at me for ruining anything. I warned you. So there.

If you can’t tell from the title, scary movies and I are not great friends. I fully admit I’m a baby when it comes to that stuff. Make fun of me if you want, because I don’t care. Scary movies suck. I hate how their goal is to make you jump out of your seat. If you like them, fine; I’m just saying I can’t handle them.

So, it would make perfectly logical sense to go see Paranormal Activity 3, right?

I’ve never seen the first two, but I understood the gist of it. There are ghosts and shit in this house, and the movies are in the style of a documentary. If you weren’t aware of the previous movies, you are now up to date.

Alright, start of the movie: there’s a family of Scruffy Dude, his wife Fake Zooey Deschanel (I will call her Fooey Deschanel) and their two young daughters Kristi and Katie. For some reason, I don’t remember the parents’ names. I like mine better anyway.

The year is 1988. Scruffy Dude’s job is to film wedding videos. The two little girls are already creeping me out, because when have little kids in scary movies not been part of the problem?

Scruffy Dude hears noises in the house, so he decides to set up some cameras. A little bit after, he and Fooey want to bone on camera. It doesn’t take long for an earthquake to mess up their mojo, then you kinda see some dust fall on something. Everyone else in the theater was freaking out, but I guess I wasn’t looking hard enough.

After that, it’s all buildup to make you jump. These scenes involve a babysitter, Scruffy Dude’s friend, Fooey and the little girls. I feel like it takes way too long to get to the jumpy part, but I’m pretty sure the director wanted to draw the tension out as long as he could. It worked a lot on me, because I jump very easily, even when I know I’m supposed to. 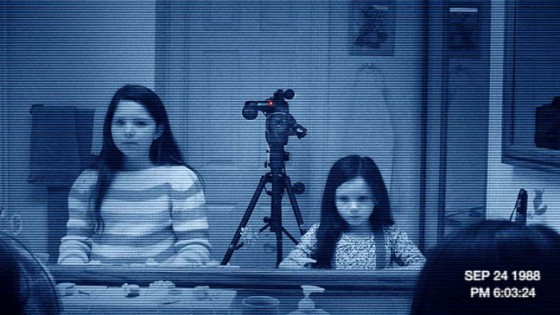 Some more shit happens. Stuff gets thrown around. The little girls are stupid. You’ll probably jump a couple of times and hate yourself like I did. I think the first reaction when you jump is subtly looking at the people around you to see if they noticed. I did that a lot.

Oh yeah, I fell asleep at one part near the end. I closed my eyes for what seemed like a second and missed one of the buildups. I woke up when everyone screamed but didn’t see why they were screaming.

It got a little ridiculous. Then there’s this part where Scruffy Dude is walking toward… something, and you know he shouldn’t be walking toward it and everyone’s like “GET THE FUCK OUT OF THERE,” but he keeps going and you’re going to get scared. Actually, this happens a lot throughout the movie (and in most horror movies). Some people enjoy that kind of helplessness with no control from the character’s view (yeah, I took one film class in college). It’s like a theme park ride. You get to pretend you have control until the climactic moment of the scare, then you become aware that you’re using the character’s perspective. No, I will not pick up that film analysis I just dropped.

I don’t know how to endorse or recommend this. If you like scary movies, you’ll probably like Paranormal Activity 3. If you’re like me, you’ll probably find it to be a trial (even though it’s barely an hour and a half). It’s as simple as that. Either way, we all know it will make a lot of money.