Rice in the Texas Bowl

As a Rice alumni, I felt it was my duty to write something about my former school in one of its 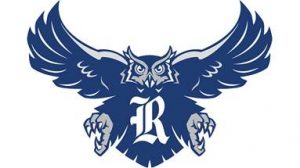 rare Bowl appearances. The second-smallest school in Division I-A as measured by undergraduate enrollment, Rice is not a football powerhouse. Not by a long shot. And when you combined the small size with a reliance on academics, the result has not exactly lent itself to a strong football program. Think of Duke University, but this time for a school located in the middle of football hotbed Texas. Despite the cushy locale, Rice isn’t bringing in great football players. That’s not to say the team has always sucked rocks. They’ve had a few good season, but have rarely been invited to bowl games even when eligible due to a small fan base and being a member of some of the NCAA’s least regarded Division I-A conferences.

So what has changed? Rice joined Conference USA in 2005, leaving behind the Western Athletic Conference. And Conference USA has some guaranteed bowl tie-ins. Well that and the ever increasing number of bowl games pretty much make certain of actual bowl appearances from time to time. That doesn’t mean Rice can actually win bowl games, however. On December 30th, the Owls will go for their first bowl win since 1954. And it’s only their second bowl appearance since 1961 (they lost the 2006 New Orleans Bowl to Troy). So it will be along time coming for an actual win.

If you want some of Rice’s football highlights, you have to go back to their 1954 Cotton Bowl victory over Alabama. Rice running back Dicky Maegle set a number of Cotton Bowl records that day, but the game is most remember when Maegle was tackled by Alabama’s Tommy Lewis. What was so special about the hit? Lewis, sans helmet, leapt off the Crimson Tide bench and blindsided Maegle on a potential touchdown run. Lewis quickly returned to his seat, and officials ended up awarding Meagle with a 95 yard touchdown run. Here’s a YouTube clip of the incident:

In addition to that game, the Owls defeated Colorado in the 1938 Cotton Bowl, Tennessee in the 1947 Orange Bowl, and North Carolina in the 1950 Cotton Bowl. Some old, but historic wins. 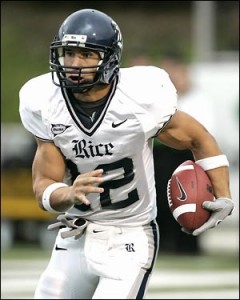 For this year’s bowl, Rice will have the home-field advantage as they play a mere two miles from campus at Houston’s Reliant Stadium. Their opponent is Western Michigan, and both teams feature high powered passing attacks. A shootout is expected, and the game may come down to which team has the ball last. For Rice, keep and eye on quarterback Chase Clement, who ranked sixth in the NCAA in passing yards. Receivers James Casey and Jarett Dillard are both expected to have big games, with Dillard being named a finalist for the Biletnikoff Award and a first team All-American by ESPN during his sophomore season. Dillard also holds the NCAA record for career touchdown receptions with 59, and Dillard and Clement hold the NCAA Division I-A record for career touchdowns between a quarterback-receiver tandem with 50.

Odds makers favor Rice at around 2.5-3 points, or basically the difference in home field advantage. Even though my vote is biased, I say to pick Rice for this year’s Texas Bowl. Their offense combined with the lack of a bowl victory in half a century will be enough to carry them to victory. And who wants to pick Western Michigan? So join me and famous Rice alumni Larry Izzo in rooting on the Owls. And if I’m wrong, well so be it. I can wait another decade for a bowl win.

Fight for Rice,
Rice fight on,
Loyal sons arise,
The Blue and Gray for Rice today,
Comes breaking through the skies.
Stand and cheer,
Vict’ry’s near,
Sammy leads the way,
Onward go! to crush the foe,
We’ll fight for Blue and Gray.