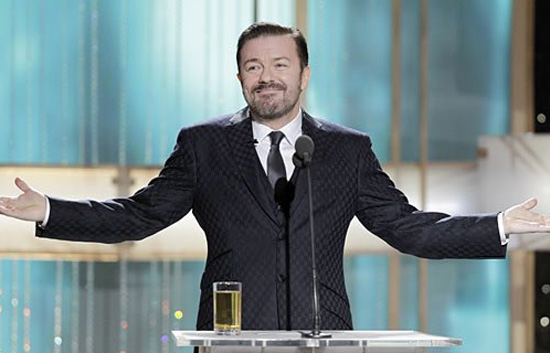 Remember when Ricky Gervais caused an uproar hosting the Golden Globes earlier this year? Remember when the humorless Hollywood glitterati and stick up their asses media took offense to his skewering of the business that is show? It was like eight months ago, so I understand if you don’t recall. Anyway, according to Gervais himself, he’s been asked by NBC to host again. [Guardian UK]

“I am [considering it] but I shouldn’t do it,” Gervais told the crowd at the MediaGuardian Edinburgh International Television Festival [Friday]. “It’s a second encore. Don’t do a second encore. I don’t think I should do it. What am I going back as?”

I can think of a dozen reasons why he should accept the offer, first and foremost being the chance to smash the thin-skinned elitists who deemed his comedy too harsh. Gervais still thinks the whole maelstrom of controversy was much ado about nothing.

“It wasn’t a roomful of wounded soldiers,” he added. “It was the most privileged people on the planet who spend all day pretending to be someone else. I teased them, I ribbed them.”

Check and mate. Regardless of whether he returns or not (and it seems he’ll decline), I gotta give NBC big ups for approaching him. They may be a broken network, but they realize a Gervais encore would equal beaucoup ratings for a broadcast most people choose to ignore.

For a quick refresher, here’s Ricky killing this past January: